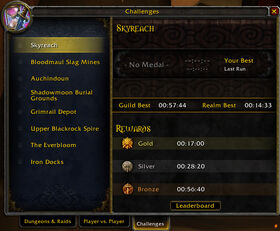 "You won't get loot from challenge modes: there's no stopping for loot, so there's none of that — I know anybody who's done the Amani War Bear, um, remembers the drama of, 'But I wanna loot!', 'But we got 15 seconds! Gogogogogo!'"

Challenge Mode was an advanced mode for 5-player dungeons designed for players looking for the ultimate test of coordination and skill. In challenge modes, players are tasked with trying to complete an existing 5-player dungeon as quickly and skillfully as possible.

Depending on how well the group does, players will receive recognizable prestige rewards such as mounts, pets, titles, achievements, or special armor artwork that can be used with transmogrification to customize a character's appearance. Players who obtain a realm-best time in a Challenge Mode dungeon (group must contain at least 3 people from the same realm to qualify) will receive a temporary title specific to each dungeon (e.g. <Siegebreaker> for Siege of Niuzao Temple, <Darkmaster> for Scholomance, etc.). This title will persist for as long as a player retains the top time on the realm. Holding a realm-best time at any point will also confer a permanent Feat of Strength to record the accomplishment.

Challenge Modes exist in expansion-long seasons, reflecting challenges in completing current content with the abilities currently available to players. At the end of each season, the current Challenge Modes are removed, and associated achievements are converted into Feats of Strength. Realm Best titles are removed, and replaced with another title appropriate to the expansion, such as <Mistwalker>. Other rewards such as cosmetic armor sets, mounts and teleport spells remain in the possession of those who have earned them.

Challenge Mode medal times and current guild and realm bests can be viewed through the Challenges interface, part of the Group Finder. Full leaderboards can be found in the "Community" section of the official website, to compare performances with guild mates, the entire realm, or the entire region.

During Mists of Pandaria.