For other uses, see Charge (disambiguation).

A charge is one of those things that always ends badly for someone.[1]

Charge is a level 3 warrior ability, and the opening skill for a warrior. Charge rapidly moves the warrior towards a target within a 8 - 25 yd range, roots it for 1.5 seconds, and generates 20 Rage. 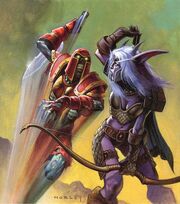 Charge in the TCG.

Charge is a great way of opening a fight, if using it will not attract unwanted adds. Even while tanking, a quick Charge after a ranged class pull, followed immediately by a

[Demoralizing Shout] can be a good way to group up mobs.

Charge is great for catching escaping targets or just generating extra rage. In PvP, it can be very useful for staying within range of ranged classes.

Because Charge has a minimum range of 8 yards, it can often benefit the warrior to briefly move away from their opponent, allowing them to use Charge again. This not only roots the opponent, but also generates extra rage, which can be immediately dumped into

[Cleave], if nothing else.

Similarly, because of Charge's minimum range, there are situation where it may be to the warrior's advantage to let a fleeing opponent gain some ground on the warrior, in order to allow the use of Charge. As Charge has no rage cost, there is often no reason not to use it as often as possible, especially in single combat.

While Charge is extremely fast, the 1.5-second root often only keeps the target in place long enough for the warrior to get in melee range. If used for keeping a running player or mob in range,

[Hamstring] or some other movement-restricting skill must be used immediately after the Charge. However, while brief, Charge's root is still long enough to allow for a free hit, and time to use Hamstring or

[Piercing Howl] before the target has a chance to move out of range.

Charge is an excellent ability for use in pursuit of an opponent, such as when chasing the opposing flag carrier in Warsong Gulch. When used defensively to peel attackers away from your team's flag carrier, Charge not only allows the warrior to swiftly catch-up to their target (or targets), but when followed by snares or stuns (such as

[Intimidating Shout]), allows the warrior to swiftly outstrip them, potentially moving out of melee range before they have a chance to retaliate.

Charge can also be used to great effect when carrying flags in battlegrounds such as Warsong Gulch and Twin Peaks. Used in this way, Charge can significantly accelerate one's progress across the map.

Similarly, Charge can be very useful when trying to escape a group of melee attackers, by Charging a more distant target. This can be particularly useful when carrying a flag, or when in pursuit of a player who is.

Charge is not on the global cooldown. This allows warriors to use another ability immediately before or even during a Charge. When using Charge as an opener,

[Heroic Throw] makes an excellent addition, adding extra damage and aggro to the target. If used just before Charge, the global cooldown triggered by other abilities will usually expire immediately after the warrior reaches their target.

When attempting to Charge mounted opponents, players should be aware that server lag may cause problems estimating whether a target is within range of Charge. Although the target may be within range at the time of casting, lag may mean that the target has already moved out of range before Charge is actually used. When using Charge from a mount, this will still cause you to dismount, allowing the target to escape. In such situations it is advised to wait until somewhat closer to the target than normally necessary, in order to compensate for potential delay caused by lag.

Charge is typically very smart about avoiding obstacles and climbing cliffs as long as the front of the enemy is open and it is possible by normal means. It often fails to find a path if a small object is right in front of or to the side of the target.

It is possible to Charge right past an enemy and not get aggro as long as the warrior is outside of aggro range at the beginning and end of the charge.

It is possible to Charge mid-air, while jumping, falling or suffering knockback. This can save the warrior's life if they're being knocked over a cliff, or simply save fall-damage and time otherwise wasted returning to combat.