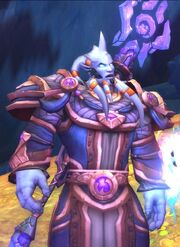 Hatuun, before he became broken.

Chieftain Hatuun is the leader of the Krokul of Argus. Hatuun knows Velen from before the Burning Legion corrupted the eredar, and resents him and the draenei who fled Argus.[1]

One of the Council to the Triumvirate, Hatuun was among the eredar who gathered in Mac'Aree when Kil'jaeden told them about Sargeras. He watched Kil'jaeden impassively.[2] When the draenei fled Argus, Hatuun stayed behind despite Velen's protest to face the traitor Talgath so Velen could escape. He asked Velen to protect his family.[3]

Hatuun would eventually become one of the Krokul. Thousands of years after the Genedar's escape, he had become bitter about the Prophet leaving him and others behind, even though he made the choice to stay on his own. When the Xenedar, the ship of the Army of the Light, crashed on Krokuun, Hatuun and his people saved Turalyon and brought him to the Krokul Hovel.[1] When the forces of Azeroth arrived on Argus to fight the Burning Legion, Hatuun begged them to aid his people.[4] When Velen returned to Argus and investigated the Krokul Hovel, Hatuun revealed himself to Velen and told him how he was bitter after thousands of years, but the adventurer who had saved them from the Legion's grasp may show that Velen had changed.[1]

The adventurer and Turalyon met with Hatuun and told them that his scouts found the remains of Aggonar. He revealed a secret passage to the High Exarch and the hero. The chieftain mentioned to Turalyon that his people hid, adapted; in their hour of need, the land still listened to their pleas.[5] Soon after securing a staging ground in the Antoran Wastes, the Speaker of Azeroth Magni steadied the chieftain's people's hearts.[6] Hatuun told the hero that the "one in diamonds" is distressed, then not soon after addressed that something changed with the stone in the cave at Krokul Hovel.[7][8] In the aftermath of taking out the Soul of Argus, his current whereabouts is unknown.