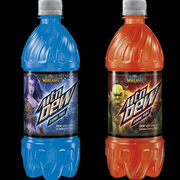 Mountain Dew Game Fuel, produced by Pepsi Cola Inc., was a new version of Mountain Dew soda released on August 13th, 2007 and available for 12 weeks in stores for the release of Halo 3. It was later reintroduced with World of Warcraft under similar limited release with two flavors of choice, with each representing a faction within the game: Citrus Cherry Flavor for the Horde (the same flavor as the Halo Game Fuel) and Wild Fruit Flavor for the Alliance, with members of those faction being displayed on the bottle of their flavor.

Both the Halo 3 promotion and the WoW promotion were only available in the United States.

Starting on May 15th, 2009 at 3:00pm Eastern Time all residents of the United States are allowed to open accounts at mountaindewgamefuel.com to begin gaining tokens to be used to enter one of several sweepstakes drawings to be held through out the promotion.

How to Gain Tokens

There are many ways to gain tokens, with some that are per day, while others only award once. A participants can only have 2000 at one time, and will be forced to spend them if they wish to gain more.

The first time a Participant signs in to the Website and designates their choice of either the Horde or Alliance faction ("Initial Sign-In") will earn the Participant 100 Tokens. Limit of 100 Tokens per Promotion Period.

Each day a Participant returns and signs-in to the Website will earn the Participant 25 Tokens with the exception of the Initial Sign-In. Limit of 25 Tokens per day.

A Participant who emails friends with promotion details, and for each friend that completes the Initial Sign-In after clicking a link from the email he/she receives for the Promotion (only applies to "new" Initial Sign-Ins, does not apply to any "friends" that may have previously signed-in to the Website), the Participant, will earn 50 Tokens per new "friend" Initial Sign-In. Emails can be sent to a maximum of five (5) email addresses per day. If multiple Participants refer the same friend, the Participant whose email brings the referred friend to the site will receive the 50 Tokens for the referral. Even though there is a maximum of five email messages that can be sent in one (1) day, there is no limit on the number of Tokens earned each day through email referrals.

A Participant who clicks on the "Product Facts" link on the Website will earn 25 Tokens. Limit of 25 Tokens per Promotion Period.

Watching a video on the Website will earn the Participant 25 Tokens per video per day.

Reading one of the timelines, background of the Horde and Alliance or the "BlizzCon Survival Guide" documents on the Website will earn the Participant 25 Tokens per document per Promotion Period.

Clicking through and signing-in to the Website via the Mountain Dew Game Fuel callout on www.mountaindew.com will earn the Participant 25 Tokens per day. A Participant already logged in will automatically earn Tokens as seen on the Participant's Account History page.

Clicking through to the Website via a link in the monthly DEWsletter (a total of 3 DEWsletters throughout the Promotion Period) will earn a Participant 25 Tokens per DEWsletter. A Participant already logged into the Website will automatically earn Tokens as seen on the Participant's Account History page.

While it would seem that it would have been simple to add Canada into the distribution, this is not the case. Health Canada, through the Canadian Food and Drugs Act, prohibited the sale of caffinated soft drinks other than cola; a caffinated Mountain Dew was classified as a natural health product and branded "Dew Fuel", produced until 2007. Thus, regular Mountain Dew sold in Canada at that time was actually the United States' "Caffeine-Free Mountain Dew". Game Fuel has caffine in it, and producing a non-caffinated version for a limited time promotion would likely not have been cost-effective.

In March 2010, the ban on synthetic caffeine in non-cola beverages was lifted and in March 2012 new recipes containing caffeine replaced regular Mountain Dew, "Mountain Dew Citrus Charge". A "Mountain Dew White Out" and "Mountain Dew Code Red" are also available, all as regular or diet drinks and slurpee flavors. The new flavors have a caffine content of 51 mg per serving, compared to the US's content of 54 mg.

It should be noted however that this does not mean that Game Fuel promotions will be available to Canada in the future. The limited-edition "Mountain Dew Dark Berry" for The Dark Knight Rises film, released on June 18, 2012 for eight weeks, was only available in the US.