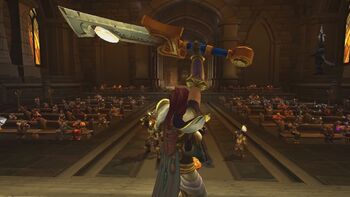 An adventurer being the paladin Class Order leader in the Sanctum of Light, as seen in the Legion feature trailer.

Class Orders (or simply Orders) are a Legion gameplay feature which represent the collective effort of each class to band together and face the threat posed by the return of the Burning Legion.[1] With tensions between the Alliance and Horde preventing faction leaders from working closely, heroes joined existing class orders or formed new ones who decided to focus on this threat, and do what needed to be done.[1] The bases of operations of the class orders are called order halls. The player becomes the leader of his/her character's class order and commands its champions and troops.

With the Horde and the Alliance in disarray, players must seek out and bring together other like-minded champions to stand against the demonic hordes. In Legion, each player will take charge of an Order Hall—a site of great power linked closely to a character’s class and cause. The Order Hall will serve as each hero’s base of operations—and a bastion of hope—during their journey to the Broken Isles. From there, players will send NPC followers on missions to help defend Azeroth from the demonic incursion . . . and forge their Artifact into a Legion-felling force to be reckoned with.[2]

This list shows the different classes' Class Orders. As the Order's leader and top agent many story elements (such as quests) related to Legion will refer to the adventurer by their Class Order title. Class titles can also be obtained as actual titles. Campaign describes the story elements the character participates in through quest chains. To see a class order's campaign in detail, go to the order's respective page. Note that they are still under construction and some might be absent.

This section is flagged for a fact check!

The current status of the Class Orders with the Fourth War and its end is largely unknown, though Khadgar, Kalecgos, and the rest of the Council of Six all apparently opt to remain out of the conflict. However, most of the Class Order banners and symbols (with the notable exceptions of the Valajar banner for the Alliance, and the Silver Hand and Valajar banners for the Horde) remain visible after the end of the Fourth War in both Stormwind's Training Hall and Orgrimmar's Barracks, implying they still exist in some likely diminished form, and retain working relationships with both factions.

The Conclave is mentioned to have remained together as of the War of the Thorns, during which Anduin Wrynn requested their aid and assistance to tend to kaldorei refugees entering Stormwind,[6] although Calia Menethil eventually leaves their Temple to settle in Kul Tiras, then travels to Orgrimmar to join the Horde Council. Two of its leaders, Moira and Velen, both sided with their peoples and the Alliance against the Horde throughout the conflict.

The Knights of the Silver Hand seems to have been fractured, with some of the Horde members under Lady Liadrin, her Blood Knights and the Sunwalkers openly fighting against the remaining Order now led by the returning founder Turalyon at the Battle for Stromgarde.

The Cenarion Circle and the Earthen Ring were apparently struggling to tend to Azeroth's wounds in Silithus. The Circle apparently allowed the night elves (led by one of their leaders Malfurion Stormrage) to return to Nordrassil after the end of the war; it is implied by Yukha that while the kaldorei retain working relations with the neutral druids of the Circle, the Horde Council members are not openly welcomed in Mount Hyjal without a neutral party interceding.[7]