For the mob found in Nagrand, see Clefthoof (mob). 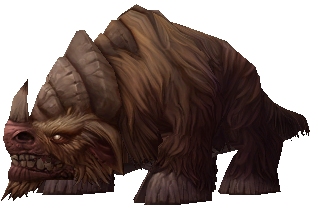 Clefthooves[1] (pl. also clefthoof[2]) are large, hairy, kodo-like beasts native to Draenor. In Outland, they can only be found in Nagrand, but they are still plentiful on the alternate Draenor. They are skinnable for

Large enough to quake the ground, covered with a thick valuable pelt, and armed with enormous tusks, these gigantic beasts are a hunter’s most treasured prize and worst nightmare rolled into one. The meat of a single adult clefthoof can feed an orc clan for days, but their inclination to travel in large packs makes them dangerous prey - beware their devastating headbutt or swiping attacks with their formidable tusks. Fortunately, it’s nearly impossible to be surprised by these massive beasts – heroes will be able to see and hear them coming from far away![2] They are known for violently defending their young.[3]

The clefthoof are the "wooly cousins" of the kodo,[4] but are not biologically related, having developed independently on separate worlds. Clefthoof became sickly and corrupt as a result of Draenor's fel corruption and subsequent transformation into Outland.[5]

It appears that ancient orcs hunted clefthoof and used their neck plating as ritual ornamentation for various sites. The Ancestral Grounds is an example of this. It is known that the animals would migrate every winter, with the Frostwolf clan - who hunted the herds alongside their frost wolves - following in their wake.[6]

Notable clefthoof are Brokentoe, an old clefthoof who is the first challenge faced in the Ring of Blood, and the ancient Banthar, whose horn is wanted as proof of hunting skill by Hemet Nesingwary.

Clefthoof meat and milk are both suitable for consuming.[8][9]

Clefthoof fat can be used in a ritual with a gronn's eyeball and a few roc beaks to be granted visions of the spirit world.[10]

Their hides can be crafted into armor,[11] and the Warsong clan have long hunted the bloodhoof clefthoof to use their crimson-hued skin for battle standards.[12]

Shed clefthoof hair gets in everything. Witherhide clefthoof have notches that cover their hooves, allowing them to scale mountains in search of food. They are not just sturdy pack animals, but also powerful instruments of war.[citation needed]

In the Warlords of Draenor, clefthooves became tamable and had the rhino pet family merged into this one. Only Beast Master hunters will be able to tame these exotic beasts. Despite being decent tanks, they are not as popular in instances, due in part to their large size.

Clefthoof are large herbivores native to the plains of Nagrand. They seem to have adapted to complete exposure, their wooly coats and thick skin protecting them from the elements, and living only in open areas. They have evolved with large, powerful horns and bony neck plating, both of which can be assumed to function mainly in dueling between males over mates due to the absence of a predatory species in Nagrand able to take down the clefthoof. Their great size is most likely the only deterrent the clefthoof needs against natural predators.

Although stated by a strategy guide, it would seem impossible for kodos and clefthoof to be related to each other (except through a titan connection). During the original Horde incursions into Azeroth, any such animal accidentally finding its way through the Dark Portal would have found itself in the Eastern Kingdoms where no currently-living animals resemble the kodos or clefthoof. Although both are plains animals, the kodo is native to the plains of Kalimdor, where it was domesticated by the tauren, long before the Dark Portal ever linked Draenor and Azeroth. That said, it should be noted that there are many other races native to Azeroth that are also native to Draenor, including skunks, tallstriders, scorpions, ancients and even worgs and wolves, among other things.

Another possible reason for their similarities is parallel evolution, where in different environments with similar conditions, animals tend to take the same body shapes.

Another strong argument against their biological relationship is the fact that kodos officially are named to be reptiles, while clefthooves are mammals, as plainly can be seen from their thick fur. Thus, any mention of clefthooves and kodos as being cousins should probably be taken as meaning in terms of their similar cultural roles as large grazing pack animals, rather than any direct biological link.

The Fel Orc Kodo Beasts serving the Fel Horde in Outland might have been clefthooves instead.