For the mob in Thousand Needles, see Cloud Serpent. 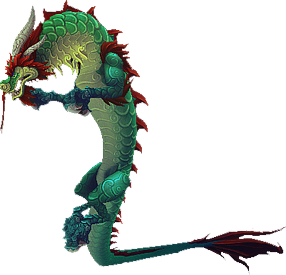 The origin of the cloud serpents is unknown. They are, however, not part of the "whole Aspects scene"[5] and are not really related to the classic Azerothian dragonflights.[6] According to Loh-Ki, an otherworldly storm was summoned by Lei Shen, the Thunder King, in his final moments, and blanketed the Vale of Eternal Blossoms with rainfall and struck jagged spears of lightning into the hills. With its final breath, the storm struck the center of the lake, igniting the very water itself. The lake burned with a crimson hue for many days. When the blaze subsided, a cloud serpent hatchling could be seen flying around the center of the lake. Its scales sparked with storm and fire, and where it flew, great clouds formed in the sky. The pandaren named it Alani, the Stormborn.

Thousands of years ago, the cloud serpents were feared as monsters and wild animals, both cunning and dangerous. During the Zandalari Troll Wars, a century after the founding of the Pandaren Empire, a young girl named Jiang took a small cloud serpent named Lo into her care. The Zandalari numbers were vast, and their bat riders fought in such a way the pandaren had no counter to. Jiang and her cloud serpent friend, however, swooped in, plucking the Zandalari from the bridge and striking down their bat riders. The war would still take many months to win, but this was the turning point. Soon Ji was training other pandaren how to ride as she did, upon the backs of other serpents. From that day forward, the serpent became a symbol of hope to the pandaren people, and the Order of the Cloud Serpent was founded.[7] Cloud serpents are wild and tempestuous by nature and, if mistreated, may still grow to be that way as adults. But a cloud serpent is not bound by its nature, no more than any of the sapient races.[8]

Cloud serpent eggs are rare and look like jewels, and were once worth their weight in solid gold. The serpents are known to lay their eggs in nests at only two places in Pandaria: on the beach of Shan'ze Dao off the coast of Townlong Steppes, where the local wood sprites are known to steal them whenever they can,[9] and on Windward Isle, off the east coast of the Jade Forest.

The wild cloud serpents live in a delicate balance with nature. Their rare eggs are quite vulnerable to enemies.[10] Recently the nests of the Jade Forest have come under attack by the Slitherscale saurok. At first, the Slitherscale were too frightened to approach the wild serpents. Soon however they began snatching the eggs under the cover of night. Now, they are slaughtering adults and hatchlings alike and eating their eggs for dinner.[11]

When the Vale of Eternal Blossoms was destroyed by Garrosh Hellscream and the Heart of Y'Shaarj, the industrious cloud serpents rescued the

[Jewel Danio] and relocated them to the Timeless Isle, allowing them to thrive once more.[12]

From their infancy, thundering cloud serpents are drawn to storms. They have been known to chase lightning through the blackened, roiling clouds, and to bathe in the pouring rain.[18]

In Mists of Pandaria, a large amount of different cloud serpent mounts are available through a variety of different methods. Originally all of these mounts required

[Cloud Serpent Riding], obtained by reaching exalted and completing the questchain for the Order of the Cloud Serpent, but the requirement was removed in patch 6.0.1.

Cloud serpents are tamable by hunters as part of the serpent family. Only pandaren hunters can tame them by default; other races must learn the skill from

[How to School Your Serpent], which can be purchased from San Redscale when exalted with the Order of the Cloud Serpent and unlocks the skill for all hunters on that account. This requirement extends to Elegon, who is classified as a spirit beast.