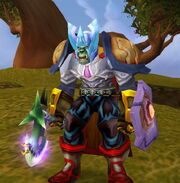 A Clownsuit, also known by the less used term "rainbow pimp gear", refers to a situation where a character's equipment has a garishly mismatched appearance but is viable enough stats-wise to still be used despite its aesthetic failure. A player who quests indiscriminately in many different areas often ends up with a clownsuit. This contrasts with coordinated armor sets which are difficult to find at low-levels, such as the famous Defias Leather set.

The term Clownsuit has also been used occasionally by fans of other games to derisively describe the World of Warcraft's art design in general, which goes for bright, ornate, colored armors versus presumably more muted ones. Incidentally, most gear acquired in Northrend compared to the ones before it seems to avoid the clownsuit phenomenon, due to a closer thematic design and muted color scheme.