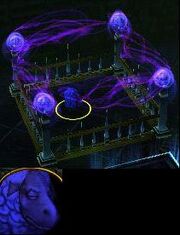 On the Warcraft III Frozen Throne Expansion Campaign Human map level three, Kael'thas and Vashj activated a secret level by stepping on platforms to say, "Baa-Ram-Ewe". These were marked off by special sheep. These sheep were the Blood Sheep, Inner Sheep and Cold Sheep in that order from bottom to top. When the password "Baa-Ram-Ewe" was activated, a door opened. There was a circle of Flying Sheep on Fire, that activated the secret level called "The Crossing" which is a tower-defense style map.