This article is about the crystalline mountain giants. For the weapon enchant, see 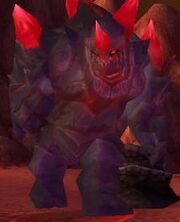 A colossus in Hellfire Peninsula.

A colossus (plural colossi), also known as a crystal giant,[1] and a earthen giant,[2] is a type of mountain giant.[3] Their flesh is stony and giant crystals stud their shoulders, back, and skull. They can be found in Outland and Azeroth.

In Hellfire Peninsula, Pathaleon the Calculator dropped a red crystal from the sky for his master Kael'thas. The crystal's evil emanations started summoning the colossi led by King Goliathon and driving them insane.[3][4]

Colossi could also be found in Netherstorm and other locations of the shattered world of Outland. The Illidari tried to negotiate an alliance with those in Shadowmoon Valley, led by Behemothon, to no success.[5][6][7]

Others could be found in Northrend. One was in the Nexus,[8] and others were in the Halls of Stone.[9][10][11] Those in the Halls of Stone were made when the iron dwarves turned their weapons on Ulduar, tunneling through its walls and carving out monstrous crystal giants from the very heart of the mountains surrounding the city.[12][citation needed]  Many friendly colossi could be found helping the earthen of Bouldercrag's Refuge and adventurers.[13]