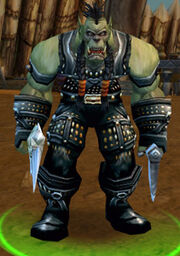 Commander Aggro'gosh is an orc quest giver located in Grom'gol Base Camp in Northern Stranglethorn. Aggro'gosh is in command of all of Grom'gol and is charged with giving safe passage for members of the Horde wishing to travel with supplies to Stonard. This has not been an easy task, as the Mosh'Ogg ogres have been attacking caravans and the Bloodscalp trolls have been stealing rations.

During the events of war against the Zandalari, Aggro'gosh defended the base camp from invading Gurubashi trolls led by Bloodlord Mandokir. The attack was successfully repelled.

Welcome to Grom'gol, <class>. Before we get off on the wrong foot, I'll have you know that I won't have slackers in my Base Camp. I expect a healthy <race> like you to pull your own weight around here.

The Gurubashi attackers just keep streaming in! We've been pinned down here and haven't received word from the outlying outposts in days.