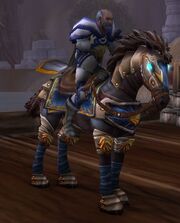 Commander Sharp is a human commander found in the Stormwind Harbor of Stormwind City. He seems to be annoyed by the presence of Bwemba and the other Darkspears.

Prior to the Battle for the Broken Shore, he sent adventurers to their boat for the assault.[1]

During the Fourth War, he was encountered by Horde champions at the Ruins of Taurajo in the Northern Barrens.[2] Later, he was carrying vital information on a Worldvein location to Theramore. The Horde staged a raid on the Southern Barrens to steal the information from Sharp.[3]

He may be related to Lawrence Sharp.