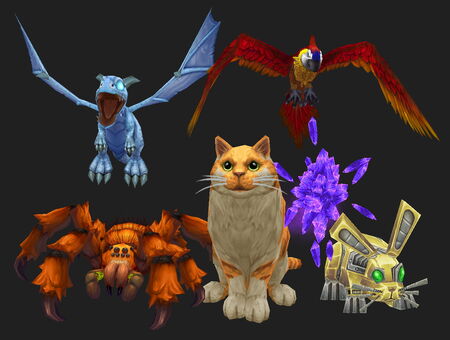 Companions (a.k.a. non-combat pets, vanity pets, battle pets, mini-pets or small pets) are small creatures (or mechanical replicas thereof) that follow your player character around. Several of these companions have their own characteristic behaviors (see individual descriptions). Companions do not affect combat in any way, and are generally of no direct benefit to your character. Companions can be inspected and summoned through the Pet Journal. As of patch 5.3.0 the game features 580 different companions.

With Mists of Pandaria, a whole new side has been added to companion pets with the introduction of the Pet Battle System. Players can battle their non-combat pets against others, with a unique system of turn-based combat. Pets have their own abilities, strengths, and weaknesses, and gain experience from battling, growing in strength as they increase in level. Players can utilize their current non-combat pets or capture new wild pets to level them and battle them against others, although a select few cannot be used to battle. For more information see Pet Battle System.

Players can collect up to a total of 650 companions, and up to 3 of any one pet. Many companions can be caged and traded to other players. Players are also able to rename their companions.

You can own as many companions as you like. Each one you acquire is added to the pets section of your character sheet. You can only have one companion out at a time, and summoning another one replaces the one that's already out. Once summoned, companions will attempt to accompany your player character as you move about the game world. Some appear to be better at this than others. Jumping down from an elevated location will often send a companion off on a circuitous route to reach your new location. If your companion gets left behind, it may catch up and reappear but may have to be re-summoned. There is no penalty for re-summoning. (The Tiny Snowman is stationary, and will not follow you.)

Companions cannot attack or be attacked in the normal sense, however, some such as

[Sleepy Willy] and Lil' K.T. will kill critters, Clockwork Rocket Bots will battle each other, and Crashin' Thrashin' Robots "will fight other fighting robot companions", a PvP game within the game. Companions have a small hidden amount of health and can be killed by the pet swimming in lava, standing on fires, or other environmental means of damage, while some, such as the

[Clockwork Rocket Bot], may occasionally self-destruct. Certain companions such as Winter's Little Helper are unavailable outside of certain times.

The Blood Parrot, spawned from the

[Bloodsail Admiral's Hat], and the Coyote Spirit, spawned from

[Don Carlos' Famous Hat], are exceptions and are summoned from the corresponding item. These are both items of apparel of some value in their own right, and having the item of apparel disappear when the pet is spawned would not be a welcome change. Because these two pets spawn differently, they are not true companions and do not count toward the pet achievements. Peddlefeet, when spawned by being shot with a

[Silver Shafted Arrow], is also an exception and does not count toward the pet achievements.

If you are teleported or use any form of transportation that reloads the environment your companion disappears and has to be re-summoned. The only zeppelin or ships that don't is the zeppelin The Zephyr between Orgrimmar and Thunder Bluff, and the Kalu'ak turtle boats of Northrend.

Originally, pets you learned how to summon could not be learned again. However, in the interests of the Pet Battle System, it is possible to collect many duplicate pets in order to differentiate by quality, and thus battle abilities.

Certain pets can be traded, usually only the ones that can easily be reattained. To trade the battle pet, click right on the pet in the Pet Journal and choose Put In Cage. This option will place them into a Pet Cage - the name of the cage will change based on what's placed inside.

Note: Currently only the player that places the pet into the cage can tell what's inside, everyone else will see the generic cage link.

There are companions that can be acquired for a time that aren't normally regarded as companions, but pretty much do the same thing as permanent companions. Many of these are in the context of a quest. Some examples are the orphans for Children's Week, Peddlefeet from the

[20-30] Kickin' Nass and Takin' Manes. None of these count toward the pet count achievements. When a temporary companion is spawned your current companion is despawned.

Note: The Snufflenose Gopher might appear to be a temporary companion, but will draw aggro like a combat pet, even though it does not fight.

Companion-related achievements are awarded for collecting certain numbers of companions:

[Looking For Multitudes] and many in the Pet Battles achievements category.

A number of companion-related functions exist as part of the World of Warcraft API, chief among them GetNumCompanions() and CallCompanion().

Patch 3.0.2, Oct 14, 2008, introduced the companion inventory item, the container, as a charged item with a single charge that spawns the companion in your pets section. After the patch was introduced, all existing pet items (i.e. those in the mail, in your bags, in the bank, etc.) were disallowed from being put up for auction. The auction system would see the pet items as "an item with charges used" and would not post them. These items are still usable, but simply may not be auctioned. New pet items created after the patch, by purchasing from a vendor or receiving as loot, may be auctioned as before.