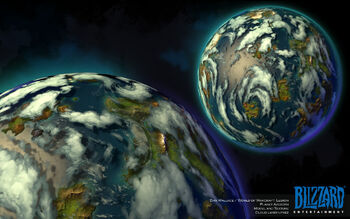 A continent (or landmass) is the largest geographical subdivision of a planet. Continents are normally broken down into regions.

The word "continent" is also used to refer to the in-game regions where the events of an expansion take place. For example, while the Broken Isles is labeled as an in-game continent, lore-wise it is just a big chain of islands.

The earliest information about landmasses in Azeroth is brief. A huge war between the titan-forged and the Old Gods occurred on the main landmass, followed by a great ordering of the planet.[1]

At the time of the War of the Ancients, 10,000 years ago, Azeroth had one singular continent called Kalimdor. The Great Sundering broke apart this landmass into various continents and islands. Currently, the ancient landmass known as Kalimdor would be called a supercontinent since all the land of the planet was once a part of it.

The number of continents has grown and shrunk as time has gone by. This is due to the discovery of new lands, the importance of those lands, and maybe politics. Currently on Azeroth, there are four continents: the Eastern Kingdoms (formed of three subcontinents) in the east, Kalimdor (formed of three subcontinents) in the west, Northrend in the north, and Pandaria in the south. These continents are bordered by the Great Sea, which occupies all the water expanse between them, and some other seas.

Before the Great Sundering Azeroth had ancient Kalimdor as a single landmass.

The Undermine was already in the early World of Warcraft Betas, not as a city on an island, but instead as a continent southeast of Kalimdor (where Pandaria is located now). The concept has been re-imagined into a city on the isle of Kezan.

A very early map has a southern landmass named Ulduar (a name later used for a location in Northrend).

Outland does not have continents in the traditional sense, since it is itself a single continent that represents the remnants of what was once Draenor. Although, Draenor had at least two continents before it was shattered, Draenor (the continent) and a big unnamed landmass to the southwest as seen in its alternate version.

The continents were changed by the war between the Titans and the Old Gods, which "ripped Azeroth into new shapes". The Elemental Plane has one continent: Deephome.[4]

This section contains information that needs to be cleaned up. Reason: Add a canon source.

The Emerald Dream and Azeroth "are quasi-duplicates of each other", but since the dream was created before the Great Sundering, it still has the same land as ancient Kalimdor.