Corrupted items are gear that has been corrupted by N'Zoth. During Battle for Azeroth Season 4, many items have a chance to be corrupted when they're received, which grants them a bonus effect and a certain amount of the corruption stat. As a character's total corruption increases, they suffer increasingly detrimental effects. Corruption also affects a character's appearance, gradually covering their body in a shimmering purple miasma. At a corruption level above 80, the miasma will turn red.

Every corrupted item will have one of the following properties. The corruption effect on an item, along with its power level and associated corruption, is determined at random. MOTHER in the Chamber of Heart sells Preserved Contaminants on a rotating basis that can be used to give items specific corruption effects.

Certain weapons from Ny'alotha, the Waking City always "roll" the same corruption effect every time they drop. Some of them have a unique effect that cannot be obtained on any other item; these are listed at the bottom of the table below.

The Eye of Corruption. 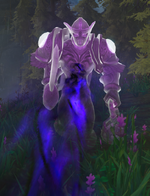 The Thing From Beyond. Its appearance is a reflection of the player's.

Wearing corrupted items raises the level of base corruption, which can be offset by the resistance provided by equipping and upgrading

Corrupted items can be purified by MOTHER, removing both benefit and corruption. Purification costs 5

and requires completion of

[120] Curious Corruption, which starts automatically upon obtaining a corrupted item for the first time. A corrupted item that has been purified can be re-corrupted by using a Preserved Contaminant purchased from MOTHER.

The subject of this section did not make it out of the PTR stages of patch 8.3.0.

On the patch 8.3.0 PTR, "corruptions" were found on rings sold by the Heartzertauren, perhaps as an alternate concept for the system or simply a way to test the effects. While Thing From Beyond made it to live as a consequence with minor changes and Last Grasp may have inspired Grasping Tendrils, all of the others were scrapped. These include:

Developers' note: While Corruption's damage taken and healing received debuffs are substantial at high Corruption amounts, players possessed of particular ingenuity have constructed strategies allowing them to deal nearly infinite damage during brief windows when they themselves are immune to damage. It's important to us that players feel like they can play around with how much Corruption they can afford to wear, but we're setting a hard limit at 200 Corruption – going beyond that, N'Zoth's dark power will defeat you.