"Mumper" redirects here. For the NPC with the same name, see Mumper (NPC). 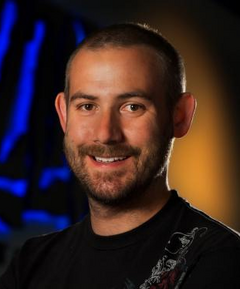 Cory Stockton (alias Mumper[1]) is a Lead Game Designer[2] and Lead Content Designer for World of Warcraft, since the Cataclysm expansion.[3][4]

As Blizzard Entertainment’s lead content designer for World of Warcraft, Cory Stockton is responsible for overseeing the design and implementation of all exterior zones, dungeons, Battlegrounds, Arenas, and cities. He is also involved with many other aspects of the game, including quest implementation and the Pet Battle System.

Stockton started at Blizzard in June 2005 as lead dungeon designer before transitioning to his current role. Prior to his arrival, he was a lead designer on the Ratchet & Clank series and also contributed extensively to the Legacy of Kain: Soul Reaver series.

In his spare time, Stockton is an avid runner, plays games extensively, and enjoys collecting classic consoles and games. He holds an associate's degree in computer animation from the Art Institute of Phoenix.[4]