For the Classic version of the quest, see

[Shield of the Barrens] or 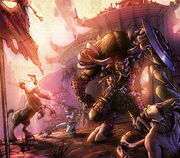 Counterattack! is the last in a line of quests that had you killing centaur and centaur leaders the Northern Barrens over. This final quest spawns a battle between Horde forces and centaur forces. The Horde forces are typically overrun by the centaur, unless you help.

Kill Kolkar centaur until Krom'zar appears, then slay him and take a Piece of Krom'zar's Banner.

The Horde commends your successes against the Kolkar, but the Kolkar themselves are maddened. I have reports that a contingent of Kolkar has traveled to the Barrens from their home in Desolace, to seek vengeance. My latest report was that, even now, they move against these bunkers, from the west!

Face the Kolkar invaders, and end their threat in the Barrens. Kill them until their leader, Warlord Krom'zar, appears. Defeat him and bring me a piece of his banner as proof.

We're counting on you, <name>.

Do you have the banner?

You have done it! You have defeated the Kolkar!

I will be sure Thrall receives word of your actions here, <name>.

Stand tall. You do yourself, and the Horde, proud.

Once you turn in

[5-30] Hezrul Bloodmark, Regthar Deathgate will warn of an impending counter-attack by an army of Kolkar, which will immediately begin as soon as you accept the quest to end the life of the fourth and final Kolkar leader.

So long as you have the quest unfinished, a never-ending battle between Horde military and Kolkar warriors will ensue. The Kolkar troops will include Kolkar Invaders and Kolkar Stormseers. By killing enough Kolkar attackers, the warlord will emerge. However, if you leave the invasion going for a certain amount of time, it will stop and you must re-activate it by speaking to Regthar again and selecting the option asking where Warlord Krom'zar is:

Whenever a Horde soldier is killed, Regthar will yell:

A defender has fallen!

Be warned, Krom'zar is a level 20 elite mob. Furthermore, he is guarded by his own group of Kolkar Invaders who will aggro alongside him no matter what. You shouldn't do this alone, despite the presence of Horde soldiers. Bring friends (or a willing high-level helper). Once Krom'zar is killed, Krom'zar's Banner will appear atop his corpse and become lootable for

[Piece of Krom'zar's Banner]. The invasion will then cease, with Regthar declaring:

The Kolkar invaders are retreating!