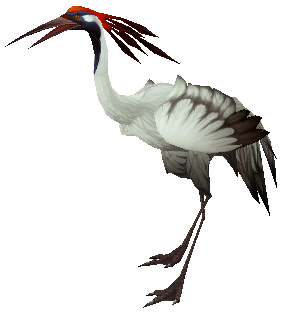 "The crane is a symbol of wisdom and nobility. Their ability to carry us into the skies is nothing short of miraculous."[1]
— Jaluu the Generous

Cranes are large birds native to Pandaria, and also found in the Shadowlands in Bastion and Ardenweald. They make their first appearance in World of Warcraft during Mists of Pandaria, and later in Shadowlands. Chi-Ji the Red Crane is one of the four creatures known as the August Celestials who watch over Pandaria. These creatures should not be confused with tallstriders.

The majestic crane is a treasured friend of the pandaren.[2] The pandaren of the Krasarang Wilds believe the cranes of Krasrang to be gifts from Chi-Ji, and their feathers are used to adorn garments and to fletch arrows.[3]

It is said that each crane flock appoints a sentry who stands guard with a stone in its beak, so that, should it fall asleep, the stone drops and it awakens.[4]

The Windfeather species of crane, found only on the Timeless Isle, are capable of producing brilliant plumage, and are highly protective of their nests. The birds seem to have an affinity with the winds, and can smooth down their feathers, allowing them to strike rapidly at predators. The matriarchs of the species sing a soothing melody, calming the chicks when they are agitated. The males seem particularly fierce, and will ruffle their feathers to sweep a powerful gust of wind at attackers. The meat of the Windfeathers makes for a savory, if lean, meal. Their feathers seem to have the ability to lighten spirits, and may have magical properties.[5] Crane chicks of the Timeless Isle sometimes sing a curious song that calms the nerves and soothes the soul.[6] The feathers of the Windfeather crane are surprisingly light to the touch and will fly away with the slightest breeze.[7]

Crane mounts can be bought from

), but there are skins in the game files for additional crane mounts.

The cranes are part of the family of cunning pets and are tamable by hunters starting at level 5. They like to eat fish and bread.