Crusader Lord Valdelmar is a undead in Tyr's Hand in the Eastern Plaguelands, and is the former ruler of Tyr's Hand for the Scarlet Crusade.[1] Even in undeath, however, he still appears to be leading Tyr's Hand. 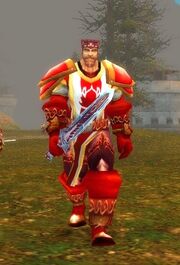 Some time after the Third War, Valdelmar was approached by the Scarlet Crusade and he agreed to help them.[2]

Before the Cataclysm, he was a living human, but somehow became undead. He is targeted by the Brotherhood of the Light.