For other crypts, see Crypt (disambiguation).

In the Eastern Plaguelands.

Crypt of Remembrance during Phase 1. 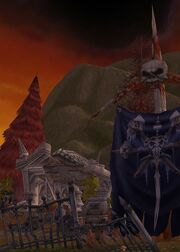 During Phase 2 of the Scarlet Enclave.

The Crypt of Remembrance is a crypt located in southern Havenshire, south of the Havenshire Farms and just north of New Avalon's wall. In the Scarlet Enclave, Baron Rivendare and Prince Keleseth - Scourge bosses in Stratholme and Utgarde Keep, respectively - give quests to starting death knight players here. In Phase 2 of the Scarlet Enclave, they have overtaken the crypt and established themselves, Crypt Guardians, and Fineous, a vendor. It changes through out the phases of the Scarlet Enclave. It is most active during the Second Phase.

After the death knight starting zone is complete, the Crypt of Remembrance is thereafter known simply as "Crypt".

During Phase one of the Scarlet Enclave the Crypt of Remembrance has not yet been captured by the Scourge. The player can visit it if they choose, there will be no NPCs there, strangely however the Crypt will already be set up as a Scourge base, the bookcases and other objects already in place inside. This is odd because it isn't captured or used until phase 2. As such Phase One occupants will not be listed as it is empty.

During the Second Phase of the Scarlet Enclave Death's Breach has become the main base of the Scourge on the ground. The player will be instructed to continue their attack by reporting to the new forward base, the Crypt of Remembrance. The Town of Havenshire having been taken over and destroyed, as the player makes their way to the Crypt they can see the death and destruction caused by them in Phase One. With Havenshire destroyed the player will now move onto the next area for their campaign of destruction, New Avalon, the Scarlet's Main base of operations in the area. The pumpkin patch, which is not far from the Crypt, is being set up for an area for a plague cauldron, courtesy of Noth the Plaguebringer. As such him, and his quests, will be included in the Crypt's occupants and quests, due to his close proximity. Eventually the Death Knights will once again be re-assigned to a new area, a secret base inside of the Scarlet's own lands.

As of Phase Three of the Scarlet Enclave the Crypt holds no important occupants, having moved to Death's Breach. The Plague Cauldron still remains active, should the player have more skulls, and the Plaguehounds still wander around the pumpkin patch. Crypt Guardians still remain, but not even Fineous remains inside.

After the Scarlet Enclave

Upon finishing the Final Quests and leaving the instanced Scarlet Enclave, one will find that like Havenshire and New Avalon, the Crypt has been abandoned. The Cauldron remains but is unusable.