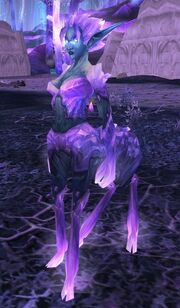 A crystal dryad in World of Warcraft. 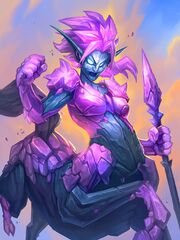 A crystal dryad in Hearthstone.

The crystal dryads are a race of crystal-like dryads or frost nymphs in Crystalsong Forest, the Nexus, Suramar, and Bonich. Given their appearance and similarity to their woodland cousins, the crystal dryads may have formerly been normal dryads that were one of the many things affected by the crystalline environment, or whatever made it. Some crystal dryads can be found lurking in the Singing Grove of the Nexus, where they watch over the arcane plant life. The shardmaidens of the Shattered Locus are dryads who were twisted by the magic of the failed arcan'dor.[1]

Crystal dryads are an offshoot race of dryads and as such, appear incredibly similar to their natural cousins, as a result of their magical exposure, their skin darkly-blue, their lower half body dark and their legs a shining bright violet color, their hair is spiky and purple and their eyes glow blue. The Crystalline Tenders of the Nexus have more white features.