“Before the Sundering, Highborne night elves lived in Crystalsong Forest and protected its trees with powerful sorcery. Today blood elves and high elves fight over the Highborne ruins. The forest is also the frontline in the battle between the blue dragonflight and the Kirin Tor, who recently relocated their city of Dalaran to float above Crystalsong.”

Crystalsong Forest, also known as Crystal Song Woods[1] and originally called Moonsong,[2] is a landlocked region in the middle of Northrend.

Crystalsong Forest was accidentally created by weak and desperate Highborne of Shandaral after the Great Sundering, who had seen the blue dragonflight crystallizing creatures and drawing magic out of them. Desperate for a replacement for the Well of Eternity, the Highborne infiltrated the Nexus and stole artifacts of the flight, earning the dragons' ire. When the dragons confronted them in the forest the elves attempted to crystallize part of the area and draw magic from the crystals to fight the dragons off, but the spell was much more powerful than anticipated and transformed the entire region as well as twisting the elves' spirits.[3]

Fandral Staghelm would later plant a Great Tree in Crystalsong.[4]

By the time of the war against the Lich King, the magical city of Dalaran was lifted and moved over Crystalsong Forest, not far from Icecrown.

Crystalsong Forest is home to a group of high elves from the Silver Covenant, and an opposing group of blood elves from the Sunreavers. They are led by Scout Captain Daelin and Scout Captain Elsia, respectively. At the Violet Stand, a group of Kirin Tor mages led by Gatekeeper Melindra stand guard against the encroaching blue dragonflight, and above, the great enchanted city of Dalaran hovers in place, with a large populace of its own. 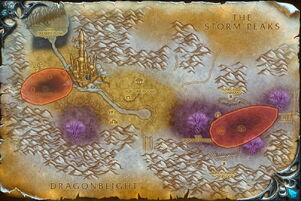 Crystalsong Forest is a very unique place located in Northrend. Picture a forest crafted from crystal, but it would not be accurate since these are not trees. Imagine a place where crystals are as tall as trees sprout from the ground, though the ground itself is crystal as well. Better think of a winter scene, snow and ice blanketing the ground, rocks and trees. Then change that snow and ice to crystal that glows from within. That is as close as someone can describe this forest and it does not begin to explain the beauty and peace that fills it. The crystals make noise — they sing. Ancient magic is at work here.[5]

Crystalsong has few residents, though they defend the forest effectively. Its crystals contain mysterious and impressive magic, enough to tempt any arcanist or tinker. For those allowed entry, the forest also provides an easy way to reach the Storm Peaks, Zul'Drak, Icecrown Glacier or the Dragonblight.[6]

In Kaskala some tuskarr can tell you some rumors about Crystalsong Forest's history although several of these rumors conflict, and who knows if they have any truth to them.[6] One thing is sure though, the Scourge cannot pass through this forest.[7]

Crystalsong Forest was not always as it is now. Once, it resembled a normal landscape. Then, black and blue dragons fought a great battle here where lots of them died. Their magic released into the air and settled as glittering light on the ground, rocks and trees. Finally an elder blue dragon, beset by many blacks, unleashed a powerful spell to strip the life from his attackers and turn them to stone. The loose magic altered and amplified the spell, spreading it across the entire region and changing soil, stone, wood and flesh into living crystal. Only the Great Tree was spared, protected by its green dragon guardians. After the battle ended, the storm giants investigated this strange new place discovering in the process that the crystals contained strong magic of their own, and began mining the forest for their own purposes. They created crystalline golems to handle the actual work, and left these creatures to defend the forest and carry crystals back to Ulduar.[6]

When the Dark One arrived in Northrend, he immediately sensed the power of the forest. He dispatched several of his mightiest servants to secure the region for his use. The golems destroyed them, and the green dragons eliminated the servants who approached the Great Tree. The Dark One tried again, this time sending a small army into Crystalsong, and this time the forest itself took steps. As the monstrosities approached, the forest's song grew louder, shaking every spire, and the creatures burst like shattered glass. The Dark One never made a third attempt, perhaps accepting that some force protected the forest and would not let him pass.[5]

Only two races live within Crystalsong Forest: crystalline golems and green dragons. Neither are particularly friendly or have any real home or culture.

The crystalline golems are constructs created by the storm giants up in Ulduar who use crystal from this forest in their experiments and items, and send the golems to fetch it. The golems also protect this place from travelers who might despoil it or settle here and destroy the region's magic. But if you are peaceful, you may pass trough the forest freely.[5]

Green dragons live only around the Great Tree. They don't care about anyone that is crossing the forest unless they approach the Great Tree, in which case they will be warned and destroyed if do not turn back.[5][6]

The ground here rolls slightly, not enough to produce real hills or valleys but enough to keep it from being utterly flat. The crystals vary in size, from a few feet to hundreds of feet high, and from a small tree to a large house in width. Small streams flow here and there, probably where snowmelt has worn channels in the crystal. When those streams reach the edge of one level and fall to the next they turn into waterfalls. It is breathtaking watching that water cascade down, lit from behind by the crystals' light.

It is unknown who dubbed this place a forest, though. Some people would have found more fitting naming it as Crystalsong Canyon, or Valley or Landscape. Many of the crystals do rise like trees, tall and straight, but others are wide and flat or slightly curved or tilted at some strange angle. It really is an entire land of crystal, as if something took an ordinary region and transformed everything within it.

The only other creatures here are birds. They perch everywhere, flitting from crystal to crystal and singing as they go. The sound echoes, and the crystals resonate to it, amplifying notes and creating new melodies from several sources. The forest itself seems to be playing music, and you can feel it through your feet and up through your bones. It is lovely and in most places so soft you strain to hear it, but it never completely fades. It is important to note, though, that even if there were no birds here, the crystals would still sing. This is old magic and has nothing to do with wildlife.

The Great Tree is the only settlement of any sort in the forest, although there is a mysterious chamber near its center. The golems are not technically alive and are always busy here, so they have no camp anywhere. Travelers who are allowed entrance set up camp anywhere the ground is level enough and open enough, but they never stay long. Only the dragons remain.[6]