Cult of the Dark Strand

The Cult of the Dark Strand was a faction of humanoids, drawing members from a variety of races, including human, troll, high elf, Forsaken, Dark Iron dwarf, and orc. The cult was led by Athrikus Narassin, an evil Highborne of great power. The cult was based at the Tower of Althalaxx in Darkshore, but had agents in the Ruins of Ordil'Aran in Ashenvale as well.

After killing Athrikus Narassin, adventurers had a chance to get a

[Journal Page] which states that the cult is a "strand" of the Shadow Council.

After the Cataclysm, it has been discovered that most if not all of its remaining members are dead. The Tower of Althalaxx has been burnt down by Horde looters, and the Ruins of Ordil'Aran have been taken over by furbolgs. Corpses of the cultists are still strewn among both areas. 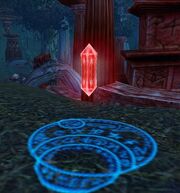 The soul gem in Satyrnaar

When the Great Sundering started, Athrikus Narassin trapped hundreds of Highborne in gems, falsely promising to save them. His cult received power by draining those Glowing Soul Gems, but there were only a few left. One, containing the soul of the Highborne Sargath, could be found among the cultists, two others in the satyr camps Night Run and Satyrnaar. Another soul, the one of Asterion, was trapped in the ruins of Bashal'Aran and guarded by the Satyrs of Deth'ryll.

Ilkrud Magthrull, lieutenant of Athrikus Narassin, commanded part of the Cult from the Fire Scar Shrine in southern Ashenvale. He carried a tome that listed where the soul gems of those spirits trapped by Athrikus were.

It seemed that a lot of satyrs, Felmusk, Bleakheart and Deth'ryll, were allied with the Cult of the Dark Strand, as they protected soulgems of Athrikus. One of their leaders, Delmanis the Hated, watched over the Tower of Althalaxx. His presence there was probably to enforce the pact between the satyr and the cult with his presence and loyalty. Also the three satyrs Balizar the Umbrage, Aligar the Tormentor and Caedakar the Vicious, who attack Feero Ironhand at the end of

[24] Supplies to Auberdine, may have been connected to the cult.

The Darkstrand Cult is an orc and Forsaken cult. Delgren the Purifier and Darian Thunderhammer were investigating it. Briefly, Brann Bronzebeard assisted Delgren. It is led by the blood elf warlock Athrikus Narassin from the Tower of Althalaxx. He has become powerful enough to command over a dozen felhounds.[1]