The daemon (pronounced the same as "demon") was the original infernal creature of the Warcraft series — the chaotic evil denizens of the Lower Planes. Daemons were summonable by the warlock unit of Warcraft: Orcs & Humans and later appeared as the minions of Gul'dan in a mission of Warcraft II: Tides of Darkness. The daemon design was scrapped for Warcraft III: Reign of Chaos.

Daemons of the First War 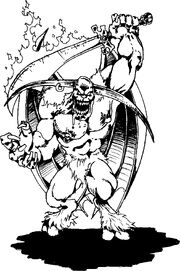 Denizens of the underworld, these creatures are the most powerful entities to ever exist in the lands of Azeroth. Their aptitude in the arts of deception and combat are only equaled by their sadistic nature, and the puissance they possess in the black arts of magic. They command the searing fires of Hell as if it were their plaything. They are the true lords of chaos, wreaking havoc at every step and destroying what they wish. There is rumored to be a gateway that appears every thirteenth full moon that bridges the gap between Azeroth and the underworld, and it is during these brief moments that the daemons can come to this place. Legend also states that some have the power to summon these creatures and control them, but if this is so, none are alive to tell the tale of how it is accomplished.[1]

These hellspawn are evil incarnate. The ability to summon these dark minions of the underworld has long been lost, though the Warlocks seek to find those secrets once again. Breathing flame and wielding a blade forged in the fires of Hades, destruction and death are their greatest desire. These daemons possess cruelty beyond the imagining of even the sickest mind, and delight in the execution of their plans. If there is a way to send these monsters back into the pits that spawned them without the loss of many lives, it too is a secret locked away in time.[2]

Daemons of the Second War 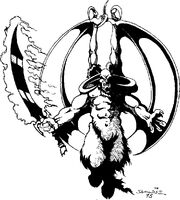 Main article: Daemon (Warcraft II)
Daemons are the ancient and corrupt denizens of the lower planes. These winged creatures of fire are legendary for their fondness of destruction and brutal cruelty. Daemons harbor a lustful hatred for all mortals and hunger for any chance to bring pain and death upon them. It is rumored that Gul'dan has entered into a pact with a sect of Daemons loyal to the Daemonlord Sargeras who are willing to aid the Warlock in finding their master's Tomb.[3]

Daemons in The Burning Crusade 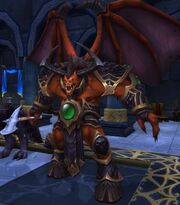 The daemons of Warcraft: Orcs & Humans are referenced in Chess Event in Karazhan in the form of the Summoned Daemon chess piece. It takes the place of a Rook on the Horde side.

The model used for the Summoned Daemon is that of a doomguard, which fits with speculation that the daemons of the first two Warcraft games are, in fact, ered'ruin. If this is the case, it may be possible that "daemon" is a name for this particular type of ered'ruin, in contrast to the other possible ered'ruin sub-type known as fiend. It is still possible that daemons may be a third race within the ered'ruin. The Warcraft I appearance for Daemon closely resembles Doomguards, and they both use flaming swords. The Warcraft II appearance for Daemon's shares much less similarities due to its more lithe, and humanoid appearance, having more similarities with Kil'jaeden's appearance in the Sunwell.