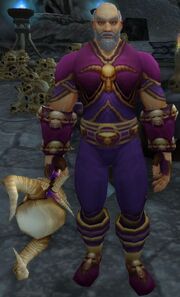 Daio the Decrepit is an elderly human warlock who trains young recruits in the infernal arts, found at an altar in the northern part of the Tainted Scar in the Blasted Lands. He was once a member of the Kirin Tor, but was exiled after helping Arrexis conduct a ritual that accidentally summoned the eredar mage-hunter Balaadur and resulted in the massacre of Arrexis and his mage followers. The disaster caused Daio to give up the arcane and instead begin a personal quest to understand demons and their fel energies.[1]

Frost mages in search of

[Ebonchill] seek out Daio at the Tainted Scar to learn more about Arrexis' fate. Before Daio agrees to help the mage with recreating the disastrous ritual, he has them fight several of his demons in order to see if they are as capable as they claim. Once the mage defeats all of Daio's minions, he gives them a

[Demon Stone] from Balaadur's home realm in order to better attune their ritual to demonic energies.[1]

You are certainly a long way from home, <race>.

I have come to learn, Daio.

So, you have found me. I suppose that you have come to learn of suppression and control.

I will teach you much more than that... you will also learn of sacrifice.

What would I sacrifice?

That will be the choice of the demon you wish to conjure and enslave. We wield dark powers and we pay grossly for the use of said powers.

How can I conjure a demon?

We must first craft a prison to confine the beast, if you wish to progress further.

You are certainly a long way from home, <race>.

I have come to ask you about Arrexis and his ritual. I must face Balaadur and I need to get his attention.

Ah, that ritual. The one where Arrexis was dragged screaming into the Nether and his entire cadre of mages were slaughtered. The ritual that caused me to give up the arcane and begin my personal quest to understand demons and their fel energies.

Balaadur is extremely dangerous and you seem... young. Are you sure you are prepared?

I have the aid of Meryl Felstorm and the spirit of Alodi, and we know what we face this time.

Balaadur and his minions have slain many mages over the years, they have perfected their craft. Before I help you with the ritual I will need to see your ability for myself. If you can face what I summon, I will give you the aid you require.

Are you prepared to face demons?

I will face your demons, warlock.

[Demon Stone] in the player's inventory.

Daio the Decrepit says: I gave Arrexis a piece so he could attune his ritual to demonic energies. You may have what remains of the stone. May it bring better luck to you.

He needs to be spoken to during