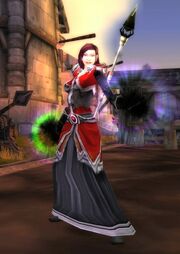 Darbel Montrose is a human rare mob found roaming with a minion in Stromgarde Keep in the Arathi Highlands.

Considering that the only known Shadow Council presence within Arathi is that of the Argus Wake, which is also in league with the Syndicate she fights alongside, it is reasonable to assume that Darbel is in fact one of its secretive agents. She can be found sitting on the fountain in front of the keep.