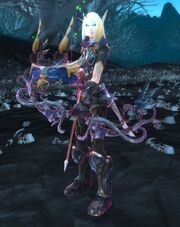 Velonara during the Third War.

Dark Ranger Velonara is a dark ranger in the service of the Forsaken.

Velonara was one of Sylvanas Windrunner's low-ranking rangers, but her success in the Scarlet Monastery during the Cataclysm opened up new opportunities for her. When the Dark Lady asked for volunteers to make the trek into alternate Draenor, Velonara answered without hesitation. Any opportunity to please the Dark Lady is worth the risk.[1] Despite her vaunted loyalty to the Dark Lady, Velonara would side against Sylvanas after the Banshee Queen defected from the Horde.

Velonara was a ranger in service of Quel'Thalas and was betrothed to a nobleman. She was killed by the death knight Arthas Menethil when he invaded the elven kingdom and created the Dead Scar.[2] Some time later, Velonara was resurrected by the undead Sylvanas Windrunner and called to her service as a dark ranger.

During the initial outbreak of the plague of undeath, her mother was tortured by James Vishas of the Scarlet Crusade.[3]

Velonara led the Horde against the remnants of the Scarlet Crusade. She was found in all four wings of the Scarlet Monastery. Her quests covered all wings equally and replaced the ones formerly given by Bragor Bloodfist. With the Scarlet Crusade on its last legs, Velonara along with several Forsaken Dreadguards and Forsaken Flesh Rippers were out to remove what remains of it from the Dark Lady's domain - by force.

Velonara is seen in Axefall in Spires of Arak dealing with the poisoned troll named Lunzul. She worked with the commander in Shadow's Vigil to find the Shattered Hand assassin, Gardul Venomshiv and created the antidote. She then joins the Garrison as a follower.

Velonara was present at Vol'jin's funeral ceremony after the disastrous battle at the Broken Shore accompanying Lady Sylvanas. She defended her when demons were revealed among the crowd by the Illidari.

She later appears at the Trueshot Lodge to represent the dark rangers in the Unseen Path, the union of all hunters on Azeroth.

Death Hunter Moorgoth admitted to having a crush on Velonara and asked the Huntsman to speak with her on his behalf.

A vision of the living Ranger Velonara can be seen fighting alongside her Farstrider comrades against the Scourge led by Arthas Menethil near the gate of Deatholme as part of the recreation of the past when Quel'Thalas fell. She was the last to fall before Arthas proceeded further into the elven home.[2]

Velonara participated in the Battle for Darkshore. When the Horde controls Darkshore, Velonara is stationed at Bashal'Aran. She enlisted Horde adventurers with striking against the Twilight's Hammer, who sought to take control of the elemental breaches within Darkshore as the Horde and Alliance were focused on one another.[4]

In the aftermath of Sylvanas's betrayal of the Horde, the death of Varok Saurfang, and the end of the Fourth War, the leaders of the Horde agreed that the position of Warchief was not needed in times of peace. As such, instead of a singular dictator, the Horde would be led by a conglomerate of leaders who would represent their people's interests known as the Horde Council.[5] Following the council's formation, Velonara came to reside near the entrance of the Orgrimmar Embassy district of the city. Though once fiercely loyal to Sylvanas, Velonara declared that her people were the sin'dorei and Forsaken and that she stood with them and the Horde. She also revealed that while some of her fellow dark rangers sided with Sylvanas, many others have remained with the Horde.

By the time of the return of the Scourge Velonara had departed from the Orgrimmar Embassy, with her current location being unknown.

Once the inn is built, she is involved in the following quests:

The subject of this section was removed from World of Warcraft in patch 5.0.4.

I need you to come on patrol with me.

On approach in the Trueshot Lodge
The Dark Lady has lent her rangers to your cause, Huntmaster.

I was just talking to Moorgoth, and he...

You mean that moping, black-clad imbecile across the way? The one who keeps leering at me?

Yes, I've noticed him. He's not the first mortal to obsess over a dark ranger. I don't understand the fascination some have with death. He should spend his time pursuing the living, not longing for a dalliance with one who has already passed.

Life is often wasted on the living.

You sound as if you miss your previous life.

I was a maiden, pure and true. A young ranger in service of Silvermoon, betrothed to the nobleman of my dreams.

I fell in battle as the mad prince cut a black scar through the land I loved. But at least I was at peace, I suppose. For a time. Until the Banshee Queen pulled me back from beyond and damned my soul into her service.

You'll have to pardon me if I have little patience for imbeciles like Moorgoth, who take for granted what they have and think to find happiness in pain.

I suppose he has a certain charm. He can't help his ignorance.

But he must realize that my heart is incapable of feeling love or happiness, nor could we... engage in the sort of intimacy he desires. I am a dead, rotting thing, and only the abyss awaits me.

Please if you find any fondness for him at all, break his heart now. It will save him true pain later.

<Velonara pauses for a moment, then takes a single black rose and caresses its petals.>

I'll let him down easily.