For the group that is the subject of this graphic novel, see Dark Riders.

Dark Riders is the first graphic novel of the World of Warcraft: Alliance comic series. It contains the following canceled issues:

On June 28, 2011 writer Mike Costa reported the script of Alliance had been completed and that work on the art was underway.[1]

On July 21, 2011 during the Blizzard Licensed Products panel at Comic-Con 2011, the graphic novel's cover was revealed, illustrated by Samwise Didier and Alex Horley Orlandelli, along with its official title. It depicts Mardigan as a worgen for the first time, and also features the Dark Riders of Deadwind Pass. 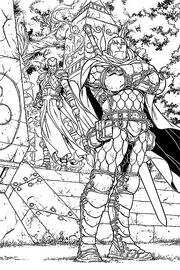 In this new, original World of Warcraft graphic novel, a stalwart mage searches for a powerful artifact, stolen by Dark Riders, only to find his son accused of murder. A righteous priest, driven by a mysterious fervor, investigates a savage Wolf Cult. As the paths of these two men join, a fantastic adventure emerges! Supported by a cast of brave heroes, the two find out just how dangerous the wolf cult and dark riders are.[2] 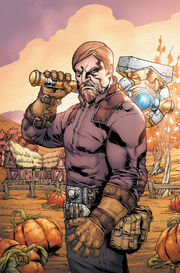 World of Warcraft: Alliance was originally an original graphic novel series set in the Warcraft universe, and the companion series to World of Warcraft: Horde. At Comic-Con 2011, it was revealed that the first volume of the OGN series would be titled Dark Riders. Since then the series hasn't been mentioned or revived.

The descriptions of the first two known issues became a part of Dark Riders.

Originally intended to be a continuation of the original World of Warcraft monthly series, Wildstorm instead opted to transition the series to an original graphic novel format, allowing them to place greater emphasis on art and narrative.[3]