This article is about the mineral. For other uses, see Dark Iron (disambiguation). 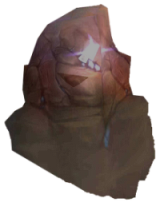 Dark iron can be found in Blackrock Depths and Molten Core. Aside from Arcanite and Elementium, dark iron was the most challenging ore to acquire before The Burning Crusade, especially in the large quantities needed to create bars.

All dark iron smelting and smithing must be performed at the Black Forge and Black Anvil, respectively. Both of these are found in Blackrock Depths, and no other anvil or forge will do.

Found only in the deepest cores of the greatest mountains, dark iron is inherently volcanic in origin. It can be forged only in the hottest of environments, and only when such places are uncorrupted by magic. The deep-dwelling dwarves of Blackrock Mountain employ a forge constructed directly into a river of molten lava, the only place they could find that could generate the required amount of consistent heat. There are also rumors that a similar forge exists in the heart of the Elemental Plane, where dark iron is much more common. A journey to this site would not be for the faint of heart. Dark iron is inherently sensitive to magic. If corrupted by incorrectly cast spells, it fractures into useless powder. Magical enhancements can be added to dark iron arms and armor only as the newly forged item cools to just the right temperature and consistency. Once the item is complete, no further enhancements or enchantments can be added. Such attempts simply fail, wasting any ingredients used in the attempt. For obvious reasons, magic dark iron items must be created at the time they are forged. Items made of dark iron are a shadowy gray color. They appear more like charcoal than metal, and if struck give a flat, dull tone instead of a metallic clang. Although they have a fragile appearance, dark iron items are exceptionally tough and resilient in battle.[1]