For the pre-Mists of Pandaria encounter, see Darkmaster Gandling (Classic).

Darkmaster Gandling served as the headmaster of necromancy at the Scholomance and, along with his teacher Ras Frostwhisper, oversaw the atrocities committed against many innocent souls.[2]

After losing control of Andorhal as well as losing most of his servants during the Western Plaguelands storyline, he is confronted and killed by adventurers allied with Lilian Voss and Alexei Barov. His demise lifted the curse upon Caer Darrow and allowed Lord Alexei Barov's spirit to finally rest in peace.[6][7] 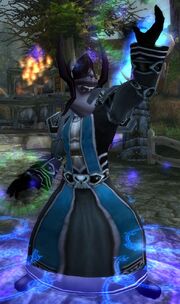 Following the Fourth War, Mathias Shaw stated that according to Argent Crusade reports, Darkmaster Gandling is still active at the head of Scholomance, with Jandice Barov and Rattlegore, and has many puppets to play with.[1] Despite his death at the hands of adventurers, its presence seems to indicate that he was brought back as an undead, certainly by the Cult of the Damned.

The recent defeat in Andorhal has put Darkmaster Gandling in the foulest of moods. More than ever, all students of Scholomance are advised to impress him at every turn. Pupils who dissatisfy the headmaster will be removed from class to perform lab work... or become lab work.

The Darkmaster attacks players with Incinerate and Immolate and periodically assigns one a Harsh Lesson, sending the player to a side room to fight Expired Test Students. When a tank or healer is sent, Gandling channels Rise!

Gandling does not need to be tanked normally, as he will only use Incinerate and Immolate from his spot in the middle of the room. He will occasionally teleport a random player in to one of the side rooms. Said player must fight his or her way out back to the study on their own.

There are several possible ways to deal with the Expired Test Subjects when trapped:

If a tank or a healer gets teleported, a large number of weakly-hitting skeletons will swarm the room. Focus on them instead of Gandling, as he takes much less damage while Rise is being channeled.

Aggro
School is in session!

Death
Darkmaster Gandling yells: Class...dismissed.
Spirit of Lord Alexei Barov says: It's over. The curse is lifted. Thank you, <name>. Thank you!

Darkmaster Gandling is a mummified wretch. He teaches students how to raise the dead in the Lich King’s name. Formerly a Dalaran wizard, he betrayed his masters for dark power and now revels in undeath. His graduates go on to Stratholme, the Scourge's capital in the Eastern Plaguelands.[8] 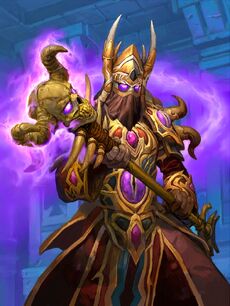 Darkmaster Gandling appears as a legendary Priest/Warlock card in the Scholomance Academy expansion for Hearthstone. His flavor text reads: "He doesn’t grade on a curve, but on a sharp spike instead."