The Darnassian City Guard are a night elven military force led by Captain Delaryn Summermoon, charged with the defense of Darnassus and night elf territories in Northern Kalimdor. They stood as the only available defenders against the Horde's invasion of the kaldorei homelands during the War of the Thorns. 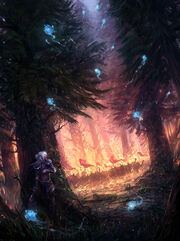 As a Horde army led by Warchief Sylvanas Windrunner departed Orgrimmar, Alliance intelligence believed that it was bound for Silithus. In response, most of the night elf Sentinel Army was dispatched on a fleet south, leaving Northern Kalimdor lightly defended. However, the Horde army then derived north. Only the Darnassian City Guard would be immediately available to defend Ashenvale and the other regions on the warpath.

The Guard mobilized quickly in response to the threat, though they could not prevent the rapid fall of many outposts across Ashenvale. Led by Captain Delaryn Summermoon, they would gather in Astranaar and assess the situation. Small reinforcements in the form of Alliance champions were sent from Stormwind City to meet the defenders there, but discovered Astranaar ruined upon arrival. A trap laid by the night elves there had failed, and the City Guard had been unable to stop the Horde's advance into neighboring Darkshore.

After dealing the enemy stragglers in Astranaar and honoring the dead there, Captain Summermoon continued on to southern Darkshore, where Malfurion Stormrage and the rest of the City Guard were engaged in a fierce defensive battle. Malfurion would call together a massive wisp wall, forming a temporary battle line, while the kaldorei defenders fought to contain Horde breakthroughs.[1]

Over the following days, the Horde continued to push through Darkshore, past the wisp wall, before being once again halted by the Darnassian defenders at Wildbend River.[2] The City Guard's numbers remained too few to do anything but hold the invaders in place, and so Malfurion, Delaryn, and some of the Alliance champions returned to Darnassus to rally reinforcements. The militia guards at Wildbend River were soon strengthened by more forces from Teldrassil, and most importantly by the recently-returned armies bound for Silithus.

Teldrassil's defenders would fight desperately to hold the Horde back, but even with the reinforcements it proved ultimately in vain. Outflanked from Feralas and with the wisp wall crumbling, the night elves would eventually lose Lor'danel and most ground leading to the World Tree while suffering heavy losses. There, Warchief Sylvanas would order Teldrassil itself to be burned as an example, as Captain Summermoon looked on, close to death.[3]

The loss of so many fighters proved a major blow for the night elves as a whole. It is unclear whether the Darnassian City Guard survived the fall of Darkshore and the Burning of Teldrassil; without Darnassus totally destroyed, it is unlikely the organization continued in its previous form. Many of the Darnassian Archers and other units seen forming its ranks, however, would later take part in the Battle for Lordaeron along with other Alliance armies.

The Darnassian City Guard may be a branch of the Sentinel Army, since their forces include Sentinels.