[Illidari-Bane Shard] in Shadowmoon Valley and completing the subsequent quest, you will be sent to Wayne as part of a quest called 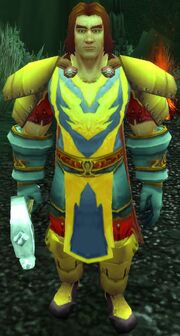 You can take a man away from the Sons of Lothar, but you can't take the Sons out of him.

It's hard to explain, but I don't feel like I'm meant to be at Honor Hold right now, is all.

Perhaps I'm meant to be part of something larger.