For the lore of the zone and its status before the Cataclysm, see Deadwind Pass (Classic).

Deadwind Pass is a contested region located in central Azeroth, joining the southeastern reaches of the kingdom of Stormwind (via Duskwood) from the east to the Swamp of Sorrows (and, eventually, the Dark Portal in the Blasted Lands) from the west. It was, a score of years ago, considered a part of the Redridge Mountains.[1]

The Ivory Tower of Karazhan, once the dark wizard Medivh’s seat of power, stands in the center of this jagged region and leaks evil magic into the land. The trees are petrified and leafless, and a terrible wind keens through the canyon. Ogres, demons, undead and a few human gypsies roam the interior. Deadwind Pass connects Duskwood and the Swamp of Sorrows, and travelers are advised to move quickly — whispers tell that a new force has claimed the Ivory Tower, and that the ogres and demons are under its sway.[2]

The landscape of Deadwind Pass.

Deadwind Pass is another region of the continent of Azeroth dominated by evil magic. It sits in the very middle of Azeroth and connects Duskwood and the Swamp of Sorrows. The Ivory Spire of Karazhan, once the seat of Medivh, still stands. It leaks corrupting magic, destroying the region's flora. The crater where Karazhan is built was formed by a magical arcane explosion long ago, and Medivh's personal theory is that the explosion happened specifically because he would one day come to live there.[3] A foul wind constantly blows across the decimated canyon, giving it the name Deadwind. Although Deadwind does have a handful of inhabitants, few run across them. Sataiel, Azeroth's first necrolyte, was given

[Ulthalesh, the Deadwind Harvester] by Sargeras himself. Sataiel methodically drained all life from the hapless inhabitants of Deadwind Pass, creating a potent magical nexus there in the process and causing the explosion that formed the crater. Hunting down Sataiel, the Guardian of Tirisfal Scavell turned the scythe on her, sending her soul to join those of her victims.[4]

The fates of many people in Azeroth and the surrounding continents were forged here. Medivh made his home here and planned the Dark Portal's creation and opening. His evil is felt in this region more strongly than anywhere else, the land corrupted with the foul taint of his magic. Currently, the pass has little significance. People move through quickly, wishing to avoid ogres, undead and demons. It is rumored that the attacking monsters do not kill those they capture, but take them back to the tower.[5]

In pursuit of his studies, Arrexis gathered his apprentice magi and from his camp performed research on Karazhan and the way it bends reality in the area. He found a way to stop the warping from happening within special wards, but while bringing the wards up reality was weakened. Medivh, who was possessed by Sargeras came to the camp and encouraged Arrexis to try his ritual on demonic realms. Arrexis caught the attention of the eredar Balaadur.[6] The catastrophe ended with Arrexis and all of his apprentices dead, Balaadur taking Ebonchill, Daio exiled from the Kirin Tor for his part in it, and all records of Arrexis destroyed and stripped from Kirin Tor records so that no one would repeat his mistakes.[7]

Medivh was sought out and killed during the First War, and the tower has since been apparently abandoned, though unknown dangers yet lurk within.

Around the time of the Burning Legion's third invasion, Deadwind Pass appears mostly devoid of life. Many spectres, ghosts, wildlife and even the nearby ogre clan[citation needed]  have been cleared away by adventurers from years past. The Violet Eye mages also seem to be gone. Right after the Battle for the Broken Shore, Dalaran was hovering over Deadwind Pass and more particularly Karazhan.[8] The entire city had been moved by a giant Blink spell, but not before Khadgar activated the defense mechanisms of Karazhan to repel the invading demons. However, the Legion was successful in taking control of the tower's exterior and town ruins around it, and the Violet Eye has returned to counter the demonic threat under the orders of Khadgar. The Legion intends to use the tower as a tether to other Legion worlds in order to open a second front in the Eastern Kingdoms, as Karazhan is built upon a ley line nexus.

This land is dead. The remaining trees are leafless and petrified, leeched of life by the tower's foul magic. The wind smells foul and dead, and the lightning storms are of concern to travelers carrying metal weapons. Undead and demons move over the land, refusing to allow it any chance of healing itself. In clear view of the road, scarecrow-like totems hang from the trees, a warning to remain on the path. The weather is in one of two states: threatening to storm or stormy. The main pass is through the middle of the region, and one must travel to the south to reach the cursed Ivory Tower of Karazhan. Few people wish to travel there, and few ever return. The few who have returned never reached the tower; attacking ogres forced them back before they came within sight of it. Besides the ogres, travelers must watch for harpies in the canyons.

Although Deadwind does have a handful of inhabitants, few are likely to run across them if they are just passing through. The Deadwind ogres comprise most of the population. The ogres are dedicated to cleansing the region of all interlopers, led by a "master". These ogres dress in foul rags and carry crude, rough weapons. They are the biggest, most obvious threat to travelers and why most caravans and groups go heavily guarded.

The humans of the region are travelers, carrying their homes on their backs and trying to stay one step ahead of the ogres, demons and undead that haunt them. They do not recognize the Alliance or even ask its aid. They simply move from place to place, fighting for their lives, stolidly proclaiming Deadwind Pass as their home.[9]

This region is barren and devoid of any useful resources - herbs do not grow here, and there are no precious metals to be found. The only wildlife to speak of are carrion birds.

The raid dungeon Karazhan can be found in this zone. Other than that, there are no dungeons of any kind and no battlegrounds here. In addition, there are no travel hubs - players will have to rely on the nearby towns of Darkshire (Alliance) and Stonard (Horde) to access this zone.

In the northern part of the region is an abandoned camp that is labeled "Ariden's Camp".

If merely passing through, the only mobs travelers usually come across are vultures and wisp-like sprites, all of which are aggressive and will attack on sight. As one goes further south, though, one will come across a tribe of Deadwind Ogres living around the bend in the road leading to Karazhan. They live both along the roadside and within the nearby caves. In addition to the ogres and vultures, many undead aggressive spirits haunt the remains of the town at the base of Karazhan, far south down the road, whose villagers were slaughtered by Sataiel long ago. Their presence also extends deep underground. There are open cellar entrances in two of the ruined houses which will lead to catacombs and caverns filled with these ghosts.

Of course, there is the tower of Karazhan itself, which dominates the southern area of the pass. Karazhan is a level 70 10-man instance in World of Warcraft: The Burning Crusade.

Deadwind Pass is also known to be the origin point of a mysterious regime known as the Dark Riders, who have been sighted in Duskwood when they slaughtered a family of farmers in search of the Scythe of Elune.

The Redridge Range stretches from the region of the Redridge Mountains to Deadwind Pass. 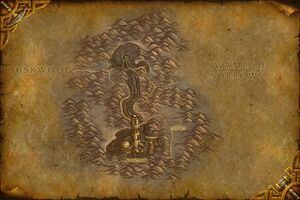 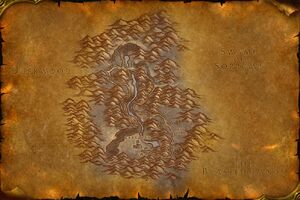 Map of Deadwind Pass prior to Cataclysm. 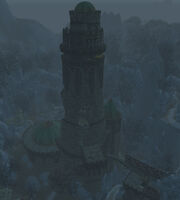 Alliance
From Darkshire in Duskwood, simply follow the road east into Deadwind Pass.

Horde
It is a little more difficult for Horde to reach the pass. Head north through Duskwood from Stranglethorn Vale, skirting alliance camps and the town of Darkshire. The road east from Darkshire leads into Deadwind Pass. For those who have already been to Swamp of Sorrows, the road west from Stonard also runs into the Pass.

Archmage Alturus, Archmage Leryda, and Apprentice Darius are the only friendly characters that have dared to brave the pass. They have come on behalf of Dalaran to investigate the disturbances coming from Karazhan and are enlisting adventurers to delve deep into the tower's mysteries.

Harpies live here in the canyons.[10]

Deadwind Pass is depicted as a healthy forested area, but once barrage of fel energy is unleashed from Karazhan the area becomes as desolate as its World of Warcraft incarnation.