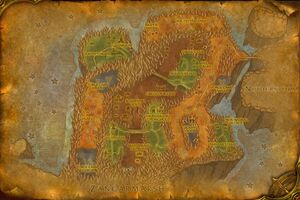 is located between Jagged Ridge to the west and Vekhaar Stand to the east in southeastern Blade's Edge Mountains. It is the location of one of the four dimensional gateways which Magtheridon used to bring demons from the Twisting Nether under his control.

Illidan Stormrage shut down the gateways, cutting off the flow of demons and ending the extra stresses on the remnants of the planet,[1] but this gateway is still partially functional, slowly bringing in Wrath Hound (hound-like demons) reinforcements for the Burning Legion. The region is guarded by the demonic agents of the Burning Legion, including Beholders and an Eredar Houndmaster responsible for bringing the reinforcements through the gateway. The gateway is only functional due to Baelmon the Hound-Master who uses his own magic to power it. But still, it is partially functional as the Houndmaster can only draw out the Wrath Hound's soul and needs one of the Legion's gates, the materialization chamber, to teleport the corporeal body and infuse it with the owner's soul.

The Wrath Hounds are then teleported to one of the Forge Camps in Blade's Edge Mountains.

A quest chain starting in Evergrove sends players to this area to stop the flow of reinforcements.

It could be inferred from Death's Door valley's unusual size and location that it was originally a Volcanic crater. It was during the Second War that the Dark Portal was constructed as part of Ner'zhul's plan to conquer other worlds. After the destruction of Draenor, Illidan Stormrage with the help of Kael'thas and Lady Vashj shut down the active portal. Sometime during the events of the first World of Warcraft, the portal was partially reactivated by the Burning Legion.

Locations of other portals: