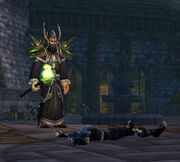 Deathstalker Vincent was a level 21 Forsaken found in Shadowfang Keep.

In preparation for an assault on Shadowfang Keep, two deathstalkers were sent to the keep to gather intelligence. Days passed, and they did not return. Without their information, the Forsaken could not do a successful attack. While scouting the Shadowfang Keep, Deathstalker Adamant was captured and thrown into a cell guarded by a worgen named Rethilgore. Vincent was later slain and left lying on the floor.

"I have changed my mind loyal servants, you do not need to bring the prisoner all the way to my study, I will deal with him here and now. Vincent! You and your pathetic ilk will find no more success in routing my sons and I than those beggardly remnants of the Kirin Tor. If you will not serve my Master with your sword and knowledge of his enemies... Your moldering remains will serve ME as a testament to what happens when one is foolish enough to trespass in my domain!"

Alliance players encountered Vincent with a yellow nameplate (but with a Horde PvP flag, laying on the floor. He would attack when damaged (non-damaging spells would not provoke him); at 1%, he would run away saying "Arrgh!", where he fell back onto the floor and became friendly. He remained a PvP flagged NPC, but was no longer Horde affiliated, and could be buffed or even healed back to full health by the Alliance group who attacked him. Ultimately, this served no purpose, as he would continue to lay there doing nothing for the rest of the instance. However, he could sometimes stay at 1 hp flagged, and every hit causing him to say, "Arrgh!" as long as people attacked him. Those who used rage could use him for rage generation, and through some skills, mana users could replenish their mana supply from him.