The Deep Reaches is a mine found in central Stonetalon Mountains. [72, 77] 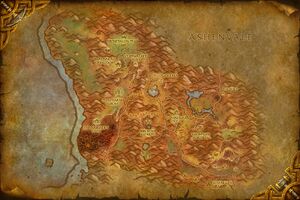 It appears as though both the Horde and Alliance have dug out separate areas to form the mine, but the Explorers' League which dug out the Alliance's side of the mine inadvertently opened a backdoor to the primary Horde base in the area, Krom'gar Fortress.

This has allowed Krom'gar Assassins to begin killing the Alliance within the mine, the surviving Alliance miners now hide awaiting help. Meanwhile on the Horde side of the mine Raging Earth Elementals have killed everything, except for some peons that were working in the area and managed to find a hiding spot to avoid death. The Alliance are attempting to seal off the mine and prevent further Horde attacks.