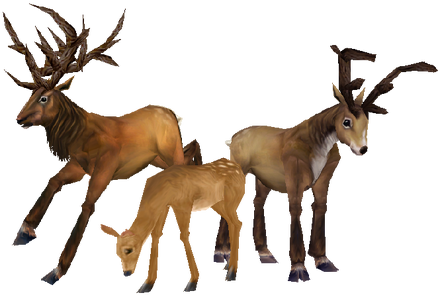 Deer are harmless herbivores found in many forested parts of the world, such as Elwynn Forest, Teldrassil, and Moonglade. Deer also live on the forest world Bonich, including a large one named Elkeirnir.

Even a fawn will total a goblin trike.[1] Only the dimwitted or insane would mount an infected deer head on their wall. The good news is they'll fit right in with their new undead friends.[2]

There are wide variety of deer, some of which have horns year round. Deer are typically medium sized animals and faster than elk. Some varieties, such as impala, live in tropical regions. Mountain deer may have the ability to spring, effectively traversing rocky terrain at three/fourths their normal speed. From mountain deer to mighty northern alpine moose, they are the primary prey of wolves and other predators. Humans typically hunt the smaller deer, while orcs prefer the challenge of an elk or moose.[3]