Delaryn Summermoon, nicknamed Del,[2] was the captain of the Darnassian City Guard, and a commander[1] of the night elven forces who fought during the War of the Thorns. Although young, she was thrust into a position of leadership and coordinated the kaldorei effort throughout Ashenvale and Darkshore until her death on the shores of Lor'danel. During the Battle for Darkshore, she was raised into undeath as a dark ranger of the Forsaken. Following the end of the Fourth War, Delaryn, along with other undead night elves, sought Calia Menethil to help them. 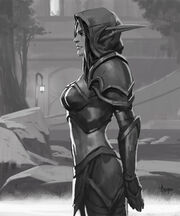 Delaryn originally held the rank of lieutenant among the Sentinels. Since the Cataclysm, she was mentored by the older and higher-ranking Sentinel Cordressa Briarbow, and the two grew close.[2]

Shortly before the War of the Thorns, Delaryn reunited with Cordressa when the older Sentinel returned to Darnassus with the surviving Explorers' League members after the events in Silithus. Delaryn was present during a conversation between Cordressa and High Priestess Tyrande in which Tyrande informed the two Sentinels of High Overlord Saurfang's apparent plans to send hundreds of Horde soldiers to Silithus. Not long after, Cordressa and the other high-ranking Sentinels were dispatched south to reinforce Silithus, while Delaryn and the rest of the Sentinels were sent to fill their positions in Ashenvale. Delaryn wasn't looking forward to serving in Ashenvale but was excited at the prospect of serving as the second-in-command to Anaris Windwood, the Sentinel commander of the region, whom Delaryn admired as a personal hero. However, she quickly became disillusioned after she and the others arrived in Ashenvale and discovered Anaris' harsh attitude.[2] 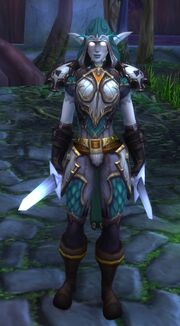 While walking through Ashenvale days later, Delaryn unexpectedly reunited with her lover, the druid Ferryn, whom she hadn't met in years. While drowsing in each others' arms a few days later, the two were awoken by a goblin rogue. After killing the intruder, Delaryn and Ferryn raced back to Silverwind Refuge to find that it had come under attack. Sentinel Vannara informed them that Horde rogues were attacking outposts across Ashenvale and that Commander Windwood was out on patrol. Delaryn and Ferryn caught up with the commander and informed her of the situation, but moments later, Rifen and Lorash Sunbeam attacked the group and killed Anaris and several Sentinels. Lorash was quickly forced to flee but Rifen was wounded and pinned to the ground. Delaryn, now commander, interrogated the dying rogue and realized in horror that the Horde was clearing a path through Ashenvale to attack Darnassus and that the talk of Silithus had all been a diversion.[2]

Delaryn quickly sent Sentinel Eriadnar to inform Malfurion Stormrage in Darnassus and Ferryn to scout out the Horde army in the Northern Barrens. Meanwhile, she gathered forces in Silverwind Refuge and prepared to mount a defense at the Falfarren River by burning the bridges. Not long after Eriadnar and Ferryn's return, magi arrived from Darnassus and opened portals for druid reinforcements. While Ferryn and the druids were sent to harry the Horde's forces, Delaryn's troops held the Horde forces off by firing at them from the western banks of the Falfarren, even despite the presence of Sylvanas Windrunner herself among the Horde troops. However, the kaldorei were forced to retreat when the Horde began magically freezing the river to allow their soldiers to cross. Having received word from the rogue Tavar that Malfurion was on his way, Delaryn gathered with Tavar and a team of druids to make a stand in Astranaar and buy the archdruid time. When Ferryn was not among the druids that Tavar gathered, Delaryn knew that he was likely dead but refused to give herself time to grieve.[2]

The elves gathered nearby corpses and placed them in Astranaar, masking their wounds to make them look as if a battle had taken place in Astranaar, before hiding around the town to ambush the Horde forces. When High Overlord Saurfang arrived, Tavar disguised himself as a Forsaken and tried to lure Saurfang into the open, but the orcs saw through the deception and killed him. Moments later, Malfurion arrived, and Delaryn's forces leapt from the trees to ambush the Horde soldiers. The attack nearly succeeded until Warchief Sylvanas joined the fray, forcing the night elves to retreat. In the midst of the battle, Sylvanas made eye contact with Delaryn and smiled briefly at her.[2]

Delaryn and the remnants of her forces reunited with Malfurion as well as with Sentinel Eriadnar at the border between Ashenvale and Darkshore, where they witnessed Malfurion calling upon the forest's wisps to destroy many of the intruders and form an impenetrable barrier. Not long after, the night elf fleet arrived and began bombarding the Horde forces on the shore. However, when the wisps began to disperse and Saurfang scaled the mountains of Felwood to invade Darkshore from the north, Malfurion knew that Darnassus was lost and ordered Delaryn to take her forces to Mist's Edge to do what they could.[2]

Delaryn fought fiercely and witnessed how the night elf ships that could still set sail fled from Teldrassil. She was hit by multiple Horde arrows, shrugging off the first few until the last one caused her to collapse on the ground. In that moment, the dying Delaryn saw Ferryn beside her, and she realized that he was dead and that what she saw was only an image conjured up by her mind.[2]

Delaryn then saw Sylvanas approaching and asked her why she would invade the tree; the Horde had already won and only innocents remained in the tree. The Sentinel tried in vain to remind the warchief of her past life as the ranger-general of Silvermoon. Sylvanas told Delaryn not to grieve, for she would soon join her loved ones. Delaryn explained that she grieved for Sylvanas, for she had made life her enemy, and that was a war she could never win; that she could kill her people, but she could never kill hope. In response, Sylvanas turned Delaryn's head so that she was forced to gaze at Teldrassil in her final moments, then gave her forces the order to burn the tree.[3]

The ghostly image of Ferryn urged Delaryn to close her eyes and let go of her hatred and fear, but the Sentinel refused, and the image of the druid vanished. Delaryn's thoughts then turned against Elune for having abandoned the kaldorei despite all that they had given in Teldrassil's defense. In her last moments, Delaryn wondered if it would hurt when she passed into oblivion.[2] 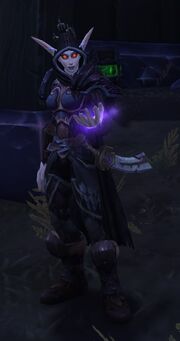 Delaryn as a dark ranger.

When the Horde returned to Darkshore, Delaryn was sought out by them specifically on Sylvanas's orders. The attempts to raise her were fought off by the night elves, first by Sira Moonwarden who was slain, and then by Tyrande and Malfurion. However, although Tyrande managed to kill one of the Val'kyr, the Horde succeeded in raising not only Delaryn but also Sira. Delaryn and Sira told Tyrande that she and Elune had abandoned them despite their trust in her, and so now they were Forsaken. Afterward, Delaryn became captain of the Forsaken's new night elf dark rangers.[4][5]

When the Horde controls Darkshore she can be found at Bashal'Aran, where when talked to remarks that she and the Horde are on the same side now and that death has a way of making everything clearer.

During the Battle for Darkshore, Delaryn appears after the death of the AzerMEK Mk. IIs to defend the platform of Sira Moonwarden. Upon defeat, she remarks that the Alliance's hope will fail them, before escaping.

In time, Varok Saurfang's revolutionaries clashed with Sylvanas Windrunner's loyalists, which saw the conflict ending in Saurfang's death and Sylvanas's abandonment of the Horde. As a result, many of the undead within the Horde felt lost, betrayed, and abandoned, including Delaryn and the other Forsaken night elves. Seeking to help them, Lilian Voss arranged a meeting with Calia Menethil and Derek Proudmoore at the Calston Estate in the Tirisfal Glades. Though initially surprised, Derek and Calia quickly offered to help the dark rangers and subsequently left the estate with them,[6] vowing to help them find a future rooted in something beyond hatred and malice.[7]

I remember you. You were there.

Remind me what happened? (The Burning of Teldrassil cinematic plays)

Do not fear, we are on the same side this time.

Death has a way of making everything clearer.

We must defeat the Horde and their vile warchief, though it might cost us that which we hold most dear.