Wowpedia
Register
Don't have an account?
Sign In
Advertisement
in: Siege weapons, Demolishers, Orcs, Wrath of the Lich King
English 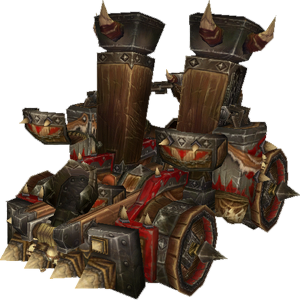 The orcish demolisher is a replacement for the formerly used orcish catapults which were replaced after the Third War. It is a standing asset to the Horde. Capable of hurling fiery projectiles over great distances, orcish demolishers have been the doom of many Alliance regiments. Though a small team of orcs must always be available to man these destructive machines, unerringly demolishers serve as the Horde's greatest siege weapon.[1] Unlike catapults, demolishers can be equipped with burning oil which smothers their projectiles in napalm and thus setting the ground ablaze wherever they land.

Despite theoretically being an improvement over the catapult, there were no demolishers in World of Warcraft until WotLK, although catapults were (and still are) quite common.

The demolisher appears in World of Warcraft: Wrath of the Lich King as a siege weapon. It is the baseline vehicle upon which the rest are based. It has both a long-range attack and a short-ranged spike ramming attack. The vehicle can also carry up to 3 passengers as well as a driver. In this vehicle, the passengers are exposed allowing them to be targeted and attacked — but also allowing them to do the same. The driver is also in control of both weapons.[2]

The Iron Horde utilized their own version of the demolisher, which took the form of a large cannon powered by an iron star.

Horde demolishers use a phlogiston-powered boiler to fling its projectiles.[3]