Not to be confused with daemon.
"Demonic" redirects here. For the demon hunter talent, see 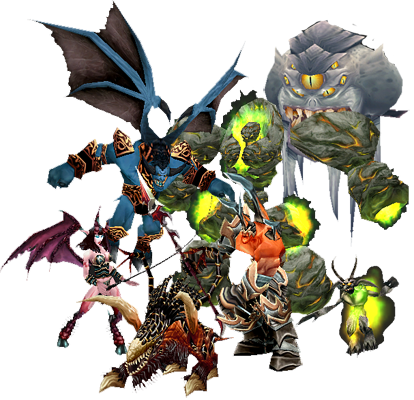 Demons or dae'mons ("twisted souls"),[1] female demonesses,[2] are immortal beings linked to the Twisting Nether. Most of them feed upon magic and life, and delight in inflicting suffering, spreading corruption, and destroying all that is good.

Originally, "demon" is what the races born from the Twisting Nether (annihilan, sayaad, shivan etc.) are called, as opposed to the races of the Great Dark Beyond (such as humans). A demon is fundamentally a creature whose soul is bound to the Twisting Nether, and as such returns to that plane upon death. They can be truly killed only inside the Twisting Nether or in places where its chaotic energies leak.[3]

Most demons were once mortal.[4][5] Indeed, mortal creatures can be turned into demons (a state draenei demonologists call "man'ari", meaning 'twisted, unnatural, defiled') by being infused with large quantities of fel magic, usually in the form of a gift or blessing such as the one Sargeras offered the eredar or as with the case of the nathrezim.[6]

Not all demons are sentient, various animals have been transformed into demons for instance,[4] and some started as constructs such as infernals. Though most demons have a deep connection with fel magic, not all of them use it, such as the demons that joined Illidan Stormrage and who fed upon his arcane source of energy instead, freed of the dependence of fel,[7] or Lothraxion, a nathrezim infused with Light magic. Not all demons are evil either, many are neutral such as the observers, who serve anyone that would allow them to observe the mysteries of the universe and feed upon all sorts of magic,[8] or the demons serving the Illidari and the Black Harvest against the Legion.

However, the vast majority of them joined the Fallen Titan Sargeras and his Burning Legion, with only one purpose: destroying all world-souls in the universe.

To combat the demonic entities that made their way into the titan's worlds from the Twisting Nether, the Pantheon elected their greatest warrior, Sargeras, to act as their first line of defense. Sargeras, the most powerful warrior among the Pantheon, carried out his duties for countless millennia, seeking out and destroying the demons wherever he could find them.[12]

After realizing that the demons he defeated did not truly die and simply returned to the Twisting Nether to reform, Sargeras created the planet Mardum, the Plane of Banishment to which he would bind all the souls of all the demons he'd defeat so when they would return to the Nether, they would reform on Mardum and remain imprisoned for all eternity.

Eventually, Sargeras learned about the fundamental flaw in the universe, a flaw that made his primary purpose an impossible goal. As long as the Void lords tried to corrupt nascent titans, there could be no peace. Under these circumstances, the struggle was futile. The universe had to be destroyed utterly and remade without the underlying defect. World-souls needed to be gone or there would always be a risk for a dark titan to awaken. Only then could true order be achieved. Thus, Sargeras conceived of a sweeping campaign to bring about the end of all things: the Burning Crusade. To carry out his plan, he shattered Mardum and freed the demons to create the Burning Legion, an infinite army who would annihilate all life in the universe.

Physical death for a demon is not a pleasant experience however for it still causes pain, even though they're temporary, as multiple demons have expressed anger and despair about their deaths.[21] Since the recent story development of demons being immortal and being able to reform and return from the Nether, a phenomenon that is now often reflected through their quotes, this behavior has been more and more diluted. It is very common now for demons to refer to their future return or virtual defeat, and some demons have used this fact as a taunt.[22][23] When a demon is killed in the Great Dark Beyond, their soul drifts calmly in the Twisting Nether, which Lothraxion describes as a pleasant experience, before being dragged by Argus and reborn, although not before their soul is punished severely for failure.[24]

Most demons' hunger for life and magic can never be sated for long. Their innate cruelty makes a moot point of whatever temporary satisfaction they can know. As a result, destruction tends to follow these demons, whether or not they are part of the Legion.[4] If a demon cannot maintain a source of magic, they will weaken and perish.[25]

Chaos, however, does not come easily to all demons - some struggle with the ways of the Burning Legion. That is why some carry an enchanted orb that invokes the rage required of any good demon. It is not known how the orbs are made, or who makes them.[26] Others decided to not follow the Legion at all and serve their own agendas, or band with like-minded people such as the Shivarra serving Illidan Stormrage against Sargeras. However rebellion against the Legion is heavily punished, normally with eternal torture, as was done to Lothraxion, submission as was done to Ner'zhul, or death as happened to Gul'dan.

Demons killed outside of the Twisting Nether simply return to the Nether, where their souls drift until they are reborn.[27][24] Sargeras modified this process slightly by having demon souls brought back through the world-soul of the titan Argus.[24] This is not unlike how he originally had bound demon souls to Mardum before. This would allow them to be reborn in the same location until Argus was killed by adventurers.

Demons killed within the Twisting Nether however, or in areas saturated with fel, die permanently.[28][3][27][24]

There is contradicting information regarding demonic regeneration on Argus. On one hand, it was established that:

On the other hand, on Argus:

Demon souls thus seemed to survive even after being killed on Argus, which should be impossible as Argus is supposed to be situated in the Twisting Nether. When asked about this, Jeremy Feasel replied that "[we were] free to speculate",[33] which was likely in reference to the audio-drama published not long after the tweet and which answered some questions.

Demons can possess various characteristics, though they don't necessarily each possess all of them.

Some demons that were not born demons can be redeemed from their demonic forms into who they originally were. While there has long been speculation on this topic, one recorded example of complete demonic redemption exists: the satyr Avrus Illwhisper. After assisting the player in curing a sick girl in Astranaar as a toll,[42] Avrus was purged of his demonic shell by Elune's blessing, turning back into a night elf and being renamed Avrus the Redeemed. Based on Avrus' experience, it seems possible that someone who is truly repentant and is willing to earn a powerful enough blessing can regain mortality even after corruption.

Demons can also be altered magically, for example Lothraxion, a member of the Grand Army of the Light under High Exarch Turalyon and Lady Alleria, is a Light-infused nathrezim. Demons altered by this way are also capable of traits such as altruism and compassion. There are also void-infused satyrs and imps in service of the Old Gods and the Nightmare, such as Xavius. Illidan Stormrage freed many demons from the fel corruption of the Legion's magic by feeding them the arcane energy held within the Shrine of Lost Souls.[43]

Warcraft I and II

In Warcraft I and II, demons were referred to as daemons, which is a variation of the term demon.

Daemons of the First War

Denizens of the underworld, these creatures are the most powerful entities to ever exist in the lands of Azeroth. Their aptitude in the arts of deception and combat are only equaled by their sadistic nature, and the puissance they possess in the black arts of magic. They command the searing fires of Hell as if it were their plaything. They are the true lords of chaos, wreaking havoc at every step and destroying what they wish. There is rumored to be a gateway that appears every thirteenth full moon that bridges the gap between Azeroth and the underworld, and it is during these brief moments that the daemons can come to this place. Legend also states that some have the power to summon these creatures and control them, but if this is so, none are alive to tell the tale of how it is accomplished.[44]

These hellspawn are evil incarnate. The ability to summon these dark minions of the underworld has long been lost, though the Warlocks seek to find those secrets once again. Breathing flame and wielding a blade forged in the fires of Hades, destruction and death are their greatest desire. These daemons possess cruelty beyond the imagining of even the sickest mind, and delight in the execution of their plans. If there is a way to send these monsters back into the pits that spawned them without the loss of many lives, it too is a secret locked away in time.[45]

Daemons of the Second War

Daemons are the ancient and corrupt denizens of the lower planes. These winged creatures of fire are legendary for their fondness of destruction and brutal cruelty. Daemons harbor a lustful hatred for all mortals and hunger for any chance to bring pain and death upon them. It is rumored that Gul'dan has entered into a pact with a sect of Daemons loyal to the Daemonlord Sargeras who are willing to aid the Warlock in finding their master's tomb.[46]

Demons (aka the demonspawn)[47] are evil creatures that inspire dread and fear in mortals. Almost all demons are members of the Burning Legion, a group with phenomenal power, that roams the cosmos preying on worlds. All demons are evil.[48]

Most demons were once mortal creatures found on the worlds conquered by the Burning Legion, but have been transformed by their conversion into demonic beings. This change includes a powerful command of arcane energy. They define and control this arcane power with the force of their will, much as sorcerers and wizards do.[49][48]

The demonic usage of magic will deploy fel magic, which uses the blood of demons to create the most corrupt and ultimate type of arcane magic. This type of magic exists naturally in demonic blood. As a result, "fel" and "demonic" is often considered the same, and the trait of being affected by "fel" is one of the most distinctive attributes of the demonic. Fel magic used by other creatures (often acquired by drinking demon blood) will grant demonic powers and, if enough is applied, even transform them into demons.

In Monster Manual there is a distinct breed of demons which use the "demonic" subtype.[49] This kind of demons are described in Manual of Monsters Appendix Three and as told before the description doesn't match the demons described in the Warcraft universe.[50] Throughout the Manual of Monsters the term "demon" refers to the minions of the Burning Legion,[49] but in the section of "demons" of the Appendix Three they refer to the demons of D&D.[50] However, the validity of the Appendix Three is disputed.