During the reign of the Burning Legion, mortals from great lords to lowly peasants who followed demonic ways received power unlike any they had known before. Although this power was ripped away, they are determined to get it back. Many of these power hungry mortals gather secretly to practice the forbidden arts of demonology and to summon demons from the Twisting Nether. They seek to usher in a new era of power at the hands of the Burning Legion. 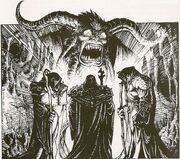 While cultists follow a unified agenda to regain their power, a great deal of distrust lingers between the races. As such, demon cults seldom include members of more than one race.

Demon cultists obsess over gaining magic or political power of any kind. They infiltrate communities and political structures to deceive key individuals in an attempt to gain wealth for their fellow cult members, to position themselves in places of authority, or even eliminate a threat that comes to close to learning the presence of a cult. Cult members in public are polite, well dressed, and very difficult to find, sometimes being high members of tribal councils or governing bodies. Primarily businessmen, traders, merchants, smugglers, and clerks comprise a cult's ranks; soldiers are uncommon but not unknown in their ranks. Cult members carry on normal lives separate from the one another in the towns and cities in which they live. They hold their meetings in the wilderness just beyond civilization, in dark glades and deep caves where the creasm of their victims - offerings to the demon lords, test subjects for new warlock magic, or unfortunates who tumbled upon thier secret - cannot be heard.

Each cultist bears an identifying mark hidden on his body that indicates his status and the cult to which he belongs. For instance, the Marapor cultists who reside along the coast region of Desolace have a brand in the shape of a six-sided star hidden under the hair on their scalp. Underblade cultists in the far reaches of the Ashenvale Forest have a small tattoo of a dripping dagger inked to the heel on the right foot. Other cultists have various marks and signs on their bodies.

One of the greater challenges when dealing with demon cults involves not how to destroy them,but how to find them. Not only do they take great pains to blend in with the populace, but cult members practice a ruthless and deadly system of keeping fellow cultists' tongues silent about their dark activities. Once a person joins a cult, she cannot leave except on pain of death (or worse). This creates a system based on respect steeped heavily in fear.

A powerful warlock stands as the head of each cult. This figure, skilled in summoning magic and able to communicate with the demons trapped in the Nether, is rarely found without the protection of cult members, a fel stalker, or some other kind of fodder he can dispose to kill those who oppose him... or to buy him enough time to escape. Even without such servants, a warlock poses a dangerous threat. Yet the rest of the cult must never be forgotten, for even if the warlock is slain, the cult simply hides until a new warlock emerges to lead it.

Demon cultists are rarely trained warrior. Stealth and terror are their primary weapons. They do not exist to fight, but to act as the means by which the great demon hosts will someday return to Azeroth. That does not mean they don't indulge in violence, however - just in the controlled (and depraved) application of it: torture, poison, assassination, on other silent deaths.[1]