The demon hunters are only available to night elves and blood elves, because they are disciples of Illidan Stormrage, who trained only members of those two races. 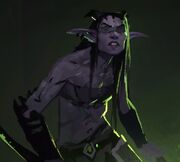 Some night elves, embittered by the brutality of the demons in the upcoming wars with the Legion, sought any power they could that would enable them to satiate their vengeance. These night elf demon hunters made a pact, long ago, to fight against the forces of chaos using its own terrible powers against it. Thus they trained under Illidan to become demon hunters themselves. These mysterious warriors ritually blind themselves so that they develop 'spectral sight' that enables them to see demons and undead with greater clarity. They wield demonically charged warblades in battle and even call upon demonic energies to augment their formidable combat skills. Although they are counted as some of the mightiest warriors within the Night Elves' society, the Demon Hunters were always maligned and misunderstood for making their selfless pact with darkness. Particularly in the Third War, these night elf demon hunters were mighty allies of night elf society against the Burning Legion, even if night elf society had shunned them.[1] Even so, they were resolved in their mission. Kor'vas Bloodthorn believed that while the Illidari demon hunters had demonic energies course through their veins and gnaw at their every thought, there was a fundamental difference between them and the Burning Legion: while the demons would stop at nothing to destroy Azeroth, they would sacrifice everything to save it. In Illidan's own words, "There is no sacrifice too great if it brings an end to the Burning Legion."

Most of these night elf demon hunters would continue to serve Lord Illidan as members of his Illidari. Though a few such as Altruis the Sufferer became disenchanted with Illidan's questionable tactics, since they believed that he became the very thing they had sworn to fight. As such, with Illidan's defeat and eventual disappearance, some of these demon hunters seek to reform the Illidari into a more honorable organization.

Following the funeral of King Varian Wrynn, the Illidari envoy Jace Darkweaver uncovers Burning Legion infiltrators plotting to attack the Alliance racial leaders, notably the newly crowned King Anduin Wrynn, during their time of mourning and aids Alliance forces in repelling the demons. Grateful for the Illidari's assistance, King Anduin allows the Illidari to establish a temporary camp in the Mage Quarter and tasks an Alliance champion to act as his envoy to them, while cautioning the adventurer to keep an eye on them lest their dark powers consume their new allies.[2] After which, the Illidari are welcomed as allies of the Alliance. 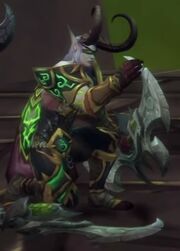 Kael'thas Sunstrider and his blood elf outcasts had abandoned the failing Alliance resistance in Lordaeron and aligned themselves with Illidan Stormrage and his Illidari. Together, they defeated the pitlord Magtheridon and made Illidan the new Lord of Outland. Illidan was impressed by the blood elves' zeal and honed strength during the battles. As a reward for his years of service, Illidan allowed Kael'thas to send him five warriors to train under him. It would be the first time blood elves would be allowed to train as demon hunters. The training was brutal. Illidan put Kael's warriors through trials that would defeat most fully capable demon hunters. Three of Kael's elves died in training - another went mad. Only Varedis Felsoul succeeded, becoming the first successful blood elf demon hunter. Varedis eventually became one of the most talented demon hunters under Illidan, surpassing many veteran demon hunters. At Illidan's request, Varedis ran the training grounds at the Ruins of Karabor - along with the three masters that had mentored Varedis and had been surpassed by him.[3] Following his example, many blood elves trained to become demon hunters like him. It is not surprising that a blood elf's potential for power as a demon hunter is so high. After all, the sin'dorei do not have the natural aversion to demonic magic that night elves do. Emboldened by Illidan's pro-active aggression against the Burning Legion and fiery determination, the blood elf demon hunters remained loyal to Illidan and his Illidari even when their own prince, Kael'thas, defected to the Burning Legion. Some demon hunters, such as Kayn Sunfury, believe in Illidan and his ideals of doing whatever it takes to defeat the Legion.

After demon infiltrators assault Orgrimmar during Vol'jin's funeral, Warchief Sylvanas Windrunner's forces and the Illidari envoy, Allari the Souleater, were able to repel the attack. Seeing that demon hunters will play a crucial part in the war but mistrustful of their motives, Lady Windrunner sends a Horde champion to act as the Horde's envoy to the Illidari and unofficially her spy.[4] After which, the Illidari are welcomed as allies of the Horde.

Two murloc demon hunters can be found on the Broken Isles; Murgulis appears in Stormheim to fight off a demon invasion, and Lil'idan is involved in battle pet world quests in Highmountain. Their origin is unknown, though they are probably just for humoristic purposes.