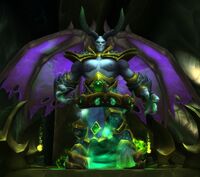 Loramus Legion
"He may look like Razelikh the Defiler, but the soul of the demon hunter, Loramus Thalipedes is actually in control of this dreadlord... mostly."

Listen to Loramus Thalipedes' story and then upgrade your Class Hall.

Having Loramus back will work greatly to our advantage, despite the fact that he's trapped inside Razelikh's body... and also that the demon sometimes takes control.

Still, he was one of our most powerful demon hunters. And now, he also has the knowledge of a dreadlord at his disposal.

I think we should have him share his knowledge and wisdom with us to improve our odds in this war.

What did Loramus the Dreadlord have to say?

That sounds like good news. He is already contributing to the cause and we are that much stronger for his help.

Still, he is not fully in control of Razelikh. I think it best that we leave him in that trap until we can find him a new body. Don't you?

And, if he proves to be too much of a problem, we can take 'other' measures.

Travel up the path behind Kor'vas and turn left, going half-way down before turning left again.

Quest accept
Kor'vas Bloodthorn says: Be careful, <name>. Half the time he's down there threatening us in the demonic tongue.

Loramus Thalipedes
Greetings, <name>. I suppose an explanation is in order if there is ever to be any trust between us.

Yes, tell me everything, Loramus.