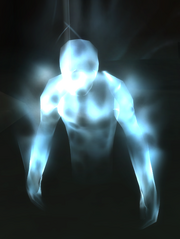 Denalan is a night elf quest giver located on the eastern edge of Lake Al'Ameth in Teldrassil. He is a herbalist that works on curing the new world tree, and dealing with the raging timberling situation. He has a small tent and a row of plants. Occasionally, a small group of mini-timberlings, with the color scheme of greater ones (blue-green) will spawn next to him. They are only level 2-3 though, and are easily dispatched.

He died during the Burning of Teldrassil, and his soul ended up in the Maw as a result of the machine of death being broken. While being imprisoned within the Tremaculum, he was rescued by mortals aligned with the Night Fae Covenant, at the urging of Ysera.[1] Following his liberation, he came to reside in the Heart of the Forest within Ardenweald.

The creation of Teldrassil was a grand achievement, but now the world must shift to regain it's[sic] balance.

Have you ever seen such a glorious forest? The trees!

Thank you for getting me out of that awful place, so that I could see it with my own eyes.