is the eastern portion of the Beastwarrens island in the Maw. The area was taken over by the forces of Helya and Vyraz in patch 9.1. The interior of the area has the appellation Helgarde Keep, home to three rare-elite enemies and the Instance portal to the Sanctum of Domination raid. 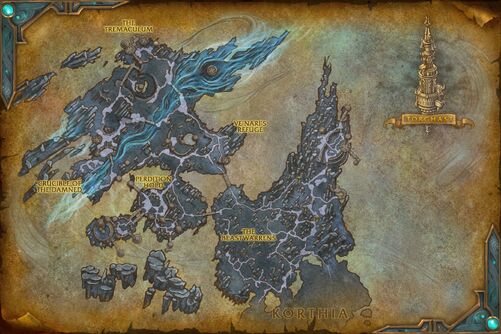 From Shadowlands launch until the release of patch 9.1, Desmotaeron was a closed zone, not intended to be available to players. All normal entrances were blocked by Mawsworn Guardians in front of closed gates, but exploring players could still manage to find their way past. The Grave Chill put a quick end to their visit, as they took ~20% of their maximum health in Frost damage every tick:

Grave Chill — Inflits 20 Frost damage every 2 sec while behind the gates of Desmotaeron.