For his The Frozen Throne statistics, see Detheroc (Warcraft III).

The dreadlord Detheroc, and his two brothers, Balnazzar and Varimathras, were left to watch over the Legion's holdings in Lordaeron when Archimonde and the main force of the Legion left for Kalimdor to deal with the fleeing orcs and humans, as well as the night elves who had defeated them in ages past. While Detheroc was the leader of the three Dreadlord Insurgents,[1] he was not necessarily the most powerful.[2]

The breaking of Ner'zhul

At Kil'jaeden's command a group of dreadlords consisting of Detheroc, Tichondrius, Balnazzar, Mal'Ganis, and Varimathras tortured the orc shaman Ner'zhul after he had escaped from Draenor to the Twisting Nether. Eventually, Ner'zhul, his sanity cracking, would agree to serve Kil'jaeden. Kil'jaeden passed the orc's spirit through death and revived as a spectral entity. The dreadlords bound his disembodied spirit to a specifically crafted set of armor and a mighty runeblade called Frostmourne. These items were locked in a diamond-hard block of ice to imprison Ner'zhul.[3] The Lich King and the dreadlords who had tortured him were then sent to Azeroth in order to weaken any resistance that the Burning Legion would face during the Third War. While the Lich King gathered his strength, Detheroc and his fellow dreadlords would serve as jailors and executors meant to hasten the Lich King's task by any means necessary. To this end, they would construct the Icecrown Citadel within Northrend. Though seemingly broken by the dreadlords, Ner'zhul sought vengeance and was able to play on the dreadlord's fears of Kil'jaeden in order trick them into allowing him to hurl Frostmourne out of the Frozen Throne.[4] 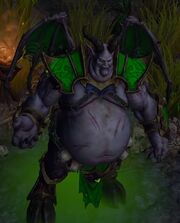 In the aftermath of the Third War, Detheroc began to notice that much time had passed without hearing a word from Archimonde. One day, Arthas Menethil stormed into the palace and informed them that their Legion was defeated and that their deaths would seal that fate. They were able to flee before he could strike.[5] Hiding in Tirisfal Glades, they coerced Sylvanas Windrunner into assisting them, and planned a coup to take back Lordaeron and rule what were now known as the Plaguelands.[6] Detheroc and his brothers assumed control of the Capital City and ambushed Arthas, but the resilient death knight battled his way through their forces[7] and fled across the sea to his master in Northrend.

With Arthas gone, Detheroc and the other dreadlords concentrated their power in Lordaeron. When Varimathras asked Sylvanas to join their new order she refused, butchered his forces, and turned him to her own side.[8] Detheroc was not so easily defeated. He used his powers of domination to control the human general, Othmar Garithos, and when Sylvanas launched her next attack upon him he turned Garithos and his forces loose on her. With Varimathras at her side, Sylvanas managed to keep Garithos at bay as she stormed into Detheroc's base and tore him apart.[9]

While leading an attack on Balnazzar in Stratholme, Eligor Dawnbringer remarked that any dreadlord slain on the mortal plane is merely banished to the Twisting Nether and opined that Detheroc and his brothers may return some day.[10] His theory proved true several years later when, just before the battle for the Broken Shore, SI:7 discovered a trap set by the Burning Legion. Before they could warn the Alliance, Detheroc ambushed the SI:7 agents and captured their leader, Mathias Shaw, and impersonated him.[11] Amber Kearnen managed to get away and tried to warn the Uncrowned but Detheroc, posing as Shaw, ordered SI:7 agents to kill her.[12]

As Shaw, Detheroc spoke lies to Anduin Wrynn about the Horde and manipulated the new king into preparing Stormwind's armies to attack them, intent on instigating another conflict between the Alliance and Horde when the world could least afford it. To cover his tracks, Detheroc placed wanted posters of the members of the Uncrowned all over Stormwind, claiming they had conspired with the Burning Legion and offering rewards for their deaths.[13] After a member of the Uncrowned freed the real Mathias Shaw, Fleet Admiral Tethys snuck them and Taoshi into Stormwind during the night. The three rogues made their way to SI:7 headquarters, where they exposed and killed Detheroc.[14] 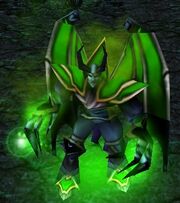 Detheroc in The Frozen Throne.