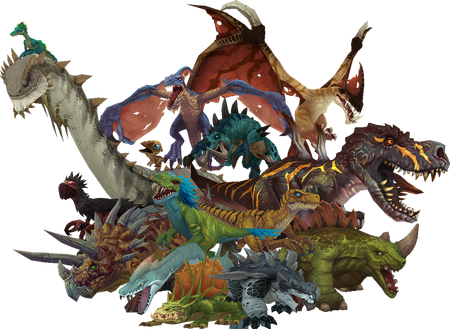 Dinosaurs,[1] or simply dinos,[1] are large, powerful reptiles who come in a wide array of shapes and sizes. They are mainly found in tropical areas, such as the Un'Goro Crater in southern Kalimdor, the Sholazar Basin in Northrend, or on the islands of the South Seas such as Zandalar and the Isle of Giants.

Trolls commonly tame and ride dinosaurs. A common rite of passage among the Zandalar tribe is to travel to one of the violent, beast-ruled islands near the capital to steal or subdue a wild creature. The lesser troll races have their own, humbler versions of this tradition, but the mastery of ravasaurs or raptors is nothing compared to the power required to call upon a devilsaur or direhorn.[2]

There may or may not be a link between the dinosaurs and the titans.[3] Among the Explorers' League, there are those who believe that birds are descended from dinosaurs such as an extinct type of raptor that had feathered arms. The feathers suggest some kind of missing link between the two different kinds of animals.[4] After the Cataclysm, Durrin Direshovel claimed to have found the mandible of an ancestor of the Un'Goro dinosaurs peeking out of the ground in Terror Run. He calculated that the dinosaur that the mandible belonged to would have been nearly 300 feet long from tip to tail while alive, longer than some of the largest dragons and far larger than any currently living dinosaur in the Un'Goro Crater.[1] Some ancient dinosaurs had talons that were up to 3 feet long.[5][6]

Some dinosaurs appear to be especially resistant against various diseases and corruptions. The devilsaur King Dred is immune to the Plague of Undeath,[7] while falcosaurs are unable to be corrupted or infused with fel magic.[8]

The term "dinomancer" applies to individuals who either tame dinosaurs, whether by normal means or magically as well as those who transform into dinosaurs.

Three different dinosaur families can be tamed as pets by hunters.

Dinosaurs play a prominent role in the Journey to Un'Goro expansion for Hearthstone. Many of the dinosaurs featured in the expansion have soaked up the primal, elemental energies of the crater, allowing them to gain powerful adaptations.

Beyond the familar species such as devilsaurs and pterrordax, the expansion also introduces several new species of dinosaur not previously seen in the Warcraft universe. These include:

These ancient lizards inspire awe and respect wherever they go. While animals, dinosaurs possess a might and magnificence that places them above other creatures of the natural world; many sapient races revere dinosaurs, or consider it a test of personal honor to hunt one of the great beasts.

While many types of dinosaurs exist, most are carnivores and thust share the same basic traits. Their forelimbs tend to prove ill-suited for combat, so they attack with their horned heads and teeth. They stake out territories and guard them fiercely. (This territorial instinct exists in herbivourus dinosaurs as well, but they tend to more peaceful behavior, attacking only when a creature wounds or threatens them.)

Dinosaurs have rough reptilian skin, thick and pebbly in texture. Their coloration varies, but many dinosaurs tend to blend in well with their natural surroundings. Despite there reptilian appearance Dinosaurs are warm blooded like birds. Most dinosaurs nest in the Un'Goro Crater, Sholazar Basin, and Islands of the South Seas which possess a pleasing climate as well as abundant territory and prey. The exceptions are the Threshadon, which lives in several places throughout Azeroth and Raptors which live all across Azeroth and Outland. Some dinosaurs make excellent riding mounts.[9]

Dinosaurs may have evolved from elementals the same way proto-dragons did.[10] This would explain things like skyscreamers being immune to lightning.