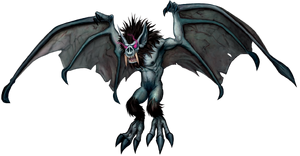 Dire gargoyles are a species of gargoyle. Although dire gargoyles are not actually undead creatures, they are staunch allies of the Lich King's forces and can often be seen circling the battlefields like hungry crows. These ice-skinned predators enjoy pain and torment, and their laughter sounds like shattering ice. They thrill to the excitement of the chase and the glory of a kill. They are a bloodthirsty, sadistic, and frighteningly destructive race.

Like the basic gargoyle species, they have been brought from the frozen north by the Lich King's armies. Like their cousins, they are voracious flying creatures who like to revel in slaughter and mayhem. They also have crystalline hides which can become a stone-like surface. Although they can't attack in that state, they can take time to regenerate from their injuries. As it is known as a dire creature, it would imply that it is larger than the standard race it evolved from. Normal gargoyles are less intelligent and less humanoid than dire gargoyles. As a result, Arthas has not bothered to enslave normal gargoyles. However, Arthas does consider the dire gargoyles his allies.

Dire gargoyles are not particularly bright creatures, and likening them to crows is no mistake. Despite their humanoid appearance, gargoyles are not sapient. They will attack at a whim, swooping from above to tear into the enemy's ranks with little thought for their own protection. These vicious creatures enjoy chaos and disintegration and revel in sprays of blood and torn flesh. They are not interested in combat strategy or grand army tactics, preferring simply to take advantage of the enemy wherever they see weakness.

Because dire gargoyles are not particularly intelligent, this strategy serves them well. They hover above the enemy while it is being attacked by a greater foe and then swoop down and carry off those too weak to struggle effectively. They enjoy such sadistic measures, and creatures carried away in this fashion can expect to live for a while — just long enough to regret the situation. A dire gargoyle that comes across a solitary target takes great pleasure in tormenting its prey. It attacks, withdraws, attacks again from concealment, withdraws, and attacks again, all the while taunting the harried creature.[1][2]