Divine Aegis is a passive specialization ability for Discipline priests, available at level 24. It significantly alters the priest's critical heals, causes them to grant the target an absorption shield for 100% of the amount healed instead of healing for twice as much. It also gives

[Power Word: Shield] a chance equal to the priest's critical strike chance to absorb twice as much. 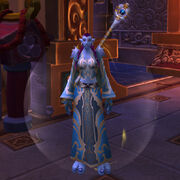 The Divine Aegis effect as seen on the Atonement card in the TCG.

Divine Aegis changes Discipline priests' healing crits significantly. Rather than healing for twice the amount, critical heals now generate a Divine Aegis buff equal to 100% of the heal. However, priests with Shield Discipline will still find their Divine Aegis to outstrip the original heal a little.

The benefit of Divine Aegis' absorption shields depends on incoming damage; only if sufficient damage is absorbed during the 15 second duration of the protective shield will Divine Aegis have been of use.

[Power Word: Shield], making the stat somewhat more valuable for Discipline priests. While boosting the spell's overall effectiveness, this therefore introduces an element of RNG into the use of Power Word: Shield.