Wowpedia
Register
Don't have an account?
Sign In
Advertisement
in: Warcraft TCG Heroes of Azeroth, Speculation, Gnome characters,
and 2 more 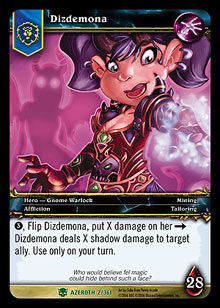 Who would believe fel magic could hide behind such a face?

Dizdemona is a gnome warlock, who once attacked Onyxia in her lair.

Her card in Heroes of Azeroth
Her miniature: Minis_Core_Set/Dizdemona

Quotes from her and references to her are found on the following cards:

"The deadliest weapon is one that ends a conflict." -

[Mirror Image].
"Let's see if this works on the third try." - Mystic Denial.